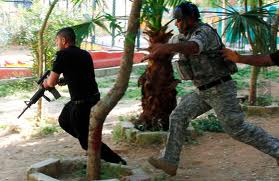 At least twelve people were killed and more than 40 people were wounded Saturday in clashes between supporters and opponents of Syrian President Bashar Assad in the northern Lebanese coastal city of Tripoli as security forces intervened to restore order, National News Agency ( NNA) reported on Saturday.

NNA added that rockets fell on the Tripoli areas of Rifa, Qobba, Al-Chaarani and Al-Baqar.

Bab al-Tebbaneh and Jabal Mohsen have been gripped by frequent fighting, reflecting a split between Lebanon’s parties where the opposition backs the revolt in Syria while a ruling coalition led by Hezbollah supports the Damascus regime.

Update; Interior Minister Marwan Charbel is heading to the Tripoli Serail to put together a security plan that involves full deployment of the army in Bab al-Tebbaneh and Jabal Mohsen to try and end the clashes.

Update: Charbel: The implementation of the new security plan will start at 5:00 am local time

Update: March 14 MP Khaled Daher blamed the criminal gangs planted by the Syrian regime since its entry into Lebanon for the deterioration of security in Tripoli and Akkar, the kidnappings and killings

He added that more than half of the gang of Arab Democratic Party Secretary General Rifaat Eid which has about 250 gunmen are Syrian spies and Shabbeeha ( thugs) . They are trying to destabilize Tripoli to sow chaos with the aim of inviting the Syrian troops back to Lebanon.

Daher added : It is well known that the security forces are subjected to political decisions and if the prime minister and the 4 ministers who are all from Tripoli cannot take the political decision then the decision is not in their hands, it is in the hands of Syria’s agents who only wish evil

to Tripoli and Akkar

Photo: A Lebanese soldier runs after a man who has stolen his rifle at a street that divides the Sunni and Alawite neighborhoods in Tripoli, northern Lebanon. Lebanese army forces were deployed on Saturday in areas in the northern Lebanese city of Tripoli, after 6 people were killed and more than 20 wounded in clashes between Alawite supporters of Syrian President Bashar al-Assad and Sunni Muslims in the Lebanese city of Tripoli.