Syrians shot while trying to cross border into Lebanon 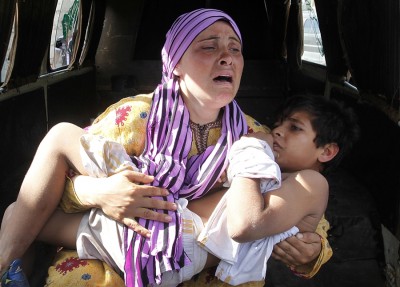 A Syrian woman, cries as she carries her injured son who was shot in his hand by the Syrian border guard when they were crossing a river from Syria to Lebanon, at the northern Lebanese-Syrian border town of Wadi Khaled, in Akkar, north Lebanon, Wednesday, May 30.

U.N. observers have discovered 13 bound corpses in eastern Syria, many of them apparently shot execution-style, the monitoring mission said Wednesday. The announcement comes days after a massacre in Houla, in the central Homs province, which killed more than 100 people and prompted worldwide condemnation against the regime of President Bashar Assad.