Syria says sanctions have bled $4B from economy 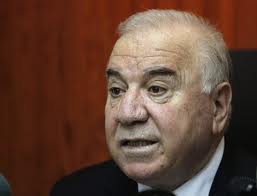 Syria’s oil minister blames international sanctions for shortages of cooking gas and other basic goods, saying the measures have bled $4 billion from the nation’s ailing economy.

President Bashar al-Assad’s regime must strike a delicate balance toward the U.S. and EU sanctions as it confronts a 15-month-old uprising against its rule, acknowledging their heavy toll while denying the regime’s grip on power is in any way shaken.

Sufian Allaw said Wednesday the punitive measures were to blame for the shortages that have left Syrians across the country standing in long lines to pay inflated prices for cooking gas, fuel, sugar and other staples.

A UN-appointed panel of human rights experts said Thursday that Syrian government forces and anti-government armed groups are both carrying out unlawful killings, torturing opponents and abusing children in the 15-month-old uprising.

It underlined that security forces are still responsible for the largest share of the violence.

The findings by the Independent International Commission of Inquiry on Syria show a chilling pattern of abuses on both sides of a conflict that it says has become “increasingly militarized” despite UN cease-fire efforts. The report is based on hundreds of interviews since March with victims and witnesses who fled the country.

Syria’s main opposition council, meanwhile, said it has accepted the resignation of its Paris-based president who earlier offered to step down amid mounting criticism of his leadership.

The three-member UN panel says the conflict has shifted and the government now faces armed and well-organized fighters bolstered by defectors. The widespread human rights abuses by government forces occur “most often during large-scale, military attacks on specific locations known for hosting defectors and other anti-government sympathizers,” it says.

The report documents unlawful killings by government forces in Idlib, Homs, Aleppo, Hama, Damascus and Daraa and in numerous villages. It says a clear pattern has emerged in which an attack is preceded by a blockade of main roads in a neighbourhood or village.

The U.S. ambassador to Damascus denied that international sanctions are to blame for the shortages facing Syrians.

“Our sanctions purposefully do not target oil and diesel imports, because we know that the Syrian people need both for their day-to-day lives,” Ambassador Robert Ford wrote on the embassy’s Facebook page.

Ford said the government is using fuel imports for its tanks.

“If the Assad regime decided to cut its military expenditures, more diesel and oil would be available for the Syrian people to use,” he said.

Before the Syrian uprising began in March 2011, the oil sector was a pillar of Syria’s economy, with oil exports — mostly to Europe — bringing in $7-8 million per day. This income was key to maintaining the $17 billion in foreign reserves that the government had at the start of the uprising.

Prices for a tank of cooking gas have spiraled to some $25 as shortages have spread across the country. Allaw said Syria’s gas production covers only half of the country’s needs.

Officials are seeking imports from countries not party to the sanctions. A Venezuelan tanker carrying 35,000 tons of fuel docked in Syria on Tuesday, Allaw said. Another is supposed to follow.