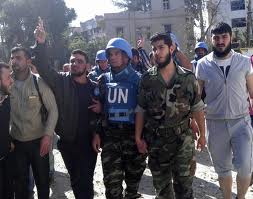 A team of international observers was evacuated Wednesday from a tense town in northern Syria a day after their convoy was hit by a roadside bomb, a U.N. spokesman said.

The team’s vehicles were struck by the blast Tuesday during a mission in the northern town of Khan Sheikhoun. None of the observers was wounded, but they had to spend the night with rebel forces in the area. Earlier Wednesday, Maj. Gen. Robert Mood, the head of the U.N. team, said he had spoken with the observers in Khan Sheikhoun by telephone and that they “told us that they are happy and safe where they are.”

“They left in one convoy in the direction of Hama,” Seklawi said referring to a central city south of Khan Sheikhoun.

Tuesday’s attack, which came minutes after witnesses said regime forces gunned down mourners at a funeral procession nearby, dealt a fresh blow to international envoy Kofi Annan’s peace plan and the U.N. effort to monitor compliance with a troubled cease-fire agreement.

Rami Abdul-Rahman, who heads the Britain-based Syrian Observatory for Human Rights activist group, said the heavy machine-gun fire has so far prevented people from holding funerals for some of the 20 mourners who were killed at the funeral on Tuesday.

The U.N. said rebel forces had given the observers shelter in the town, which has witnessed anti-government protests since an uprising against President Bashar Assad’s regime began in March last year.

Ahmad Fawzi, Annan’s spokesman, said in a statement that six staff members were “reportedly being treated well” while in rebel hands.

Fawzi said the observers were caught up in the explosion as they met with the rebel Free Syrian Army. He said three vehicles were damaged.

More than 200 U.N. observers have been deployed throughout Syria to monitor the cease-fire agreement, which has been repeatedly violated by both sides since it took effect on April 12.

The bombing was at least the second time the U.N. observers have been caught up in Syria’s violence. Last week, a roadside bomb struck a Syrian military truck in the south of the country just seconds after Mood rode by in a convoy.

It was not clear who was behind the blast and no one claimed responsibility.

A video posted by activists online appeared to show the exact moment the U.N. vehicle was struck. The video shows two white vehicles clearly marked “U.N” with people milling around it, and two others parked a few meters (yards) behind. Slippers apparently left behind by the mourners running away from the shooting earlier are seen strewn about on the ground.

The blast blew off the front of the first vehicle and sent up a plume of smoke as people screamed and frantically ran for cover. The four cars are then seen slowly driving away.

It was not clear how close the observers were to the funeral shootings, but if confirmed, a regime attack on civilians directly in front of the observer mission could put pressure on them to describe publicly what they are seeing in Syria. They report back to the U.N. but have not publicized their findings.

Syria’s state-run TV, meanwhile, reported Wednesday that authorities released 250 people who were involved in the uprising. Assad has issued several pardons releasing thousands of detainees since the crisis began.

The Syrian uprising began with mostly peaceful protests calling for change, but a relentless government crackdown led many in the opposition to take up arms. Some soldiers also have switched sides and joined forces with the rebels.