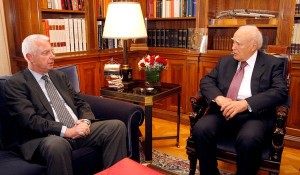 A day after Greece’s president warned about the possibility of bank runs, Greek political leaders on Wednesday began forming a caretaker government before new elections next month that could lead the rudderless country to exit the euro, a prospect that has already sent jitters sweeping through world markets.

Greek state television said that the date for a new round of elections had been set for June 17, though by early Wednesday no official announcement had yet been made.

After the failure of the last-ditch attempt to form a unity government that would honor the country’s commitments to its foreign lenders, President Karolos Papoulias began planning for a caretaker government until the vote, with Panayiotis Pikramenos taking the helm, state television reported.

Mr. Pikramenos, the head of one of Greece’s three highest courts, visited the presidential mansion on Wednesday afternoon to be officially appointed. In a televised conversation between the two men, Mr. Pikramenos said the role was “a great burden” but thanked the president for “putting your trust in me.” Mr. Pikramenos, whose name means “embittered,” added wistfully that he had perhaps the most appropriate name for the job.

The call for new elections shuddered across the euro zone, where concerns flared that rising anti-bailout forces in Greece’s Parliament could lead the nation to default on its debts, setting off new troubles in Portugal and Ireland, which are also highly indebted and rely on foreign loans.

While the new French president, François Hollande, was in Germany to express his concerns about excessive austerity with Chancellor Angela Merkel, the dissolution of the Greek state accelerated. Mr. Papoulias told party leaders on Tuesday that nearly $900 million had been pulled from Greek banks on Monday alone, and that the Greek central bank had warned of “a great fear that could develop into a panic.”

“The next two days things will get worse,” Mr. Papoulias said.

Since the end of 2009, when the crisis first hit, Greeks have withdrawn an estimated $4 billion in savings a month from the country’s banks, according to the country’s central bank, and $6.5 billion was pulled in January alone. Such fears are certain to provide the backdrop for an election campaign in which the two once-dominant parties, the Socialists and New Democracy, attempt to win voters back after collapsing at the polls.

While the voting last week was cathartic for many Greeks, the failure to form a government underscored the depth of the troubles the country faces. The debt crisis here last week precipitated the collapse of a political order that helped drive the country into a downward spiral and now seems powerless to steer it out.

“This is the problem of the country,” said Loukas Tsoukalis, the president of the Hellenic Foundation for European and Foreign Policy, a research group in Athens. “On the one hand there is a failed political class, on the other demagogues who ride on anger.”

The developments have exasperated Europe’s wealthy northern tier states, especially Germany. On Tuesday, Mrs. Merkel and Mr. Hollande, in their first joint news conference, said they hoped Greece would stay within the euro. But behind the scenes, the sentiment is growing in Berlin that Greece should be encouraged to exit the euro zone for the greater good of other economies that are more dedicated to mending their tattered finances, including Ireland, Spain and Portugal, said Paul De Grauwe, a professor of economics at the London School of Economics.

“The feeling is that Greece has been a terrible drag on the whole system, and if Greece leaves and we can set up a firewall that will guard against contagion, in the end this may be better for the euro zone,” he said.

Yet the risks of such brinkmanship could run high. No one knows if the financial defenses Europe raised against the possible domino effect of a Greek default or exit will work.

Nor is it clear that the European Central Bank would be willing to spend the hundreds of billions of euros it would take to maintain confidence in the broader European banking system, which still holds piles of sovereign bonds from Greece, Spain, Portugal and other nations that have fallen into difficulty.

“The trouble with Greece is that any effort to get it out of the euro is likely to intensify pressure on other countries,” Mr. De Grauwe said. “The scenario of contagion is a very serious one.”

There was much finger-pointing after the breakdown in talks on Tuesday. The Socialists’ leader, Evangelos Venizelos, said that he hoped Greeks would make a more “historically well-considered” choice when they returned to the polls. He added that the talks on a unity government had failed “because certain individuals put their party’s interest above the good of the country.”

His remarks were aimed at Syriza, or the Coalition of the Radical Left, which placed second in the elections on May 6 and would not join a unity government. Polls show Syriza would finish first in new elections on a platform of scrapping Greece’s loan agreement and the austerity measures that have come with it — and possibly precipitating the country’s exit from the euro zone.

Alexis Tsipras, Syriza’s 37-year-old leader, has said that if Greece stops using the euro, it will be because its loan agreement terms were impossible to meet. Mr. Tsipras’s political rivals and critics consider him to be immature and a risk to Greek stability, but he has irrefutably changed the terms of the debate.

The Socialists and New Democracy, who had their worst electoral showings in 40 years after signing Greece’s second loan agreement with creditors in February, have said that they, too, would seek to renegotiate some of the terms — an indication that no Greek government can enforce the current deal.

Antonis Samaras, the New Democracy leader, said Tuesday that his party would seek to modify the agreement to increase growth and ensure that the country remains part of the single currency bloc. “The message of the Greek people is clear: yes to the euro, no to the austerity that is crushing the Greek people,” he said.

When the government of the technocratic prime minister, Lucas Papademos, signed a second loan agreement in February — about $165 billion in loans and the largest debt write-down in history in exchange for Greece’s slashing of its budget deficit, pushing down wages, raising taxes and committing to a range of structural changes — political leaders said the deal was the only alternative to default.

Yet many Greek officials now acknowledge that the terms are pushing the country deeper into recession and making it impossible to close an ever-widening budget deficit, a view that is becoming more widespread outside of Greece. Still, it remained to be seen whether international lenders would be prepared to bend on any of the terms.

Mr. Papoulias summoned party leaders on Wednesday to name a new caretaker government. Under Greek law, such a government should comprise “well respected” individuals and the prime minister would be a top judge.

The meeting descended into the some of the same fractiousness and political wrangling present in days of failed negotiations to form a government. Emerging from the talks the Communist Party leader, Aleka Papariga, told reporters that “political games were played even in talks for the appointment of a caretaker prime minister.”

The leaders of the Socialist and New Democracy parties had supported a proposal by the president that would have Mr. Papademos stay on in the role of prime minister until the vote. But Mr. Tsipras, the head of the Coalition of the Radical Left, had pushed for a veteran Socialist to be appointed. The leader of the Democratic Left, Fotis Kouvelis, said he had insisted that the premier be “politically neutral.”

Without political agreement on the caretaker prime minister, the president, in accordance with the constitution, named a top judge.

By LIZ ALDERMAN and RACHEL DONADIO