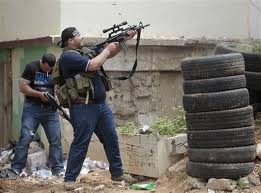 Syrian forces killed at least five people when they raided a Sunni farming village on Sunday, torching homes and looting shops in what activists said is a sign of worsening relations among the country’s religious groups.

Tensions stemming from the 14-month-old uprising against President Bashar Assad also touched off clashes across the border in Lebanon as the revolt threatened to morph into a broader conflict.

The relentless violence further undermines a U.N.-backed peace plan that is supposed to bring an end to Syria’s deadly crisis. A cease-fire that was supposed to begin on April 12 has had only a limited effect, throwing into doubt the rest of the plan that calls for talks between Assad’s regime and those seeking to end his rule.

The raid against the impoverished village of al-Tamana, about 55 kilometers (35 miles) northwest of the city of Hama, began late Saturday and continued through the early hours on Sunday. The Britain-based Syrian Observatory for Human Rights said five people were killed in the raid and government troops were setting fire to homes.

“He was a hero in the Free Syrian Army who was trying to defend the civilians,” he said, referring to the umbrella group of local, anti-regime militias.

An amateur video posted online Sunday showed men carrying the dead body of a woman from a house. A second video showed men in a mosque praying over five coffins, three of them open with flowers piled on bodies wrapped in white cloth.

The area, a plain of farmland along the Orontes River, is dotted with villages of Christians, Sunni Muslims and Alawites, the offshoot sect of Shiite Islam to which Assad belongs.

Alhamadee, who is from a village near al-Tamana, said sectarian tensions were low before the uprising, but have deteriorated as Sunni villages like al-Tamana joined the anti-Assad uprising.

He said most of the village’s residents had fled and regime forces were setting fire to houses and looting shops.

He and the Observatory also reported shelling in a nearby village, Hayaleen.

“The regime is trying to punish these villages and to put an end to this revolution as quickly as it can,” he said.

In northern Lebanon, meanwhile, residents said running gunbattles broke out in the city Saturday and continued through Sunday morning, primarily between a neighborhood populated by Sunni Muslims opposed to Assad and another area with many Assad backers from his Alawite sect.

The fighting highlights how easily trouble in Syria can raise tensions in neighboring Lebanon, with which it shares a complex web of political and sectarian ties and rivalries.

Lebanon’s national news agency NNA said one soldier was shot dead by a sniper in the city early Sunday. Another man was found dead on the side of a road while a third died after a shell landed in a residential neighborhood.

An Associated Press reporter in Tripoli said the Lebanese army sent reinforcements to the city, but that intermittent clashes continued Sunday with gunmen shooting at each other with automatic rifles. Heavier weapons, like rocket-propelled grenades, have also been fired.

Lebanon is sharply split along sectarian lines, with 18 religious sects. But it also has a fragile political fault line precisely over the issue of Syria.

An array of pro-Syrian parties support Assad’s regime, as do many Lebanese citizens. Others oppose Assad and accuse Damascus of heavy-handed meddling in Lebanese politics.

The two sides are the legacy of, and backlash against, Syria’s virtual rule over Lebanon from 1976 to 2005 and its continued influence since.

Syria’s uprising started in March 2011 with protests calling for political reform. The government brutally cracked down on dissent, and many in the opposition have since taken up arms to defend themselves and attack government troops. Some soldiers also have switched sides and joined forces with the rebels.

World powers have backed the peace plan, which was put forward by U.N.-Arab League envoy Kofi Annan to end the crisis, but the bloodshed has not stopped. More than 100 U.N. observers have been deployed in Syria to oversee the truce between the government and armed rebels.

The daily death toll in Syria has declined as the number of observers has risen, but few experts expect the U.N. plan to succeed in its entirety. The Observatory said a total of 19 civilians were killed nationwide, plus two rebels and 5 regime soldiers.

Omar Hamza said via Skype that three people were killed early Sunday by shells and machine gun rounds fired at Douma. The government was raiding other areas looking for activists, he said.

The Observatory also reported three killed in suburbs east of the capital, one of them a rebel commander.

Activist claims could not be independently verified.

The Syrian government did not comment on the reports and bars most media from working in the country.

Also Sunday, two Turkish journalists who had been detained in Syria for two months arrived in Istanbul on a plane from Iran after that country helped negotiate their release by Syrian authorities.

Journalists Adem Ozkose and Hamit Coskun were abducted by militiamen who had blocked a road and were stopping cars and abducting passengers, Ozkose told reporters in Istanbul on Sunday.

He and Coskun were later held separately at a prison in Damascus, where they slept on a concrete floor, had no sunlight and lost track of the days.

“Finding out what day it was made me happy. It made me appreciate freedom. Thank God we were saved, but there are many others inside Syria waiting for freedom,” he said.