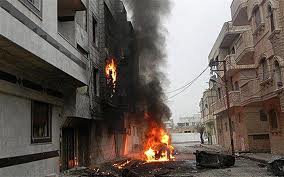 After one year and over 10,000 deaths, it’s little surprise that we find ourselves clutching at straws in Syria. But Kofi Annan’s well-intended mediation – including a ceasefire that’s already crumbling, according to Ban Ki-Moon – is unlikely to bear fruit. Syria’s civil war may have passed the point of no return.

The Assad family of all people should know how civil wars work. For 30 years President Hafez al-Assad, and later his son, occupied Lebanon. They fuelled its militias and murdered its politicians – all while Beirut burned. The irony is that we are now watching the Lebanonisation of Syria.

Annan’s ceasefire may have paused the worst of the butchery, but it won’t be for long. The peace plan requires a serious “political dialogue”, the removal of government forces from cities, and respect for right of protest – none of which Assad can provide without hastening his own demise. He will use this hiatus to buy time and regroup.

There’s a second problem, which is that there is no Syrian opposition. Rather, there are thousands of oppositions scattered across Syria. Few are willing to subordinate themselves to what they see as plump exiles wandering around the five-star hotels of Paris and Doha.

The formal opposition, dominated by the Syrian National Council (SNC), is mired in fratricidal bickering reminiscent of Monty Python’s battles between the People’s Front of Judea and the Judaean People’s Front.

Kurds, the largest ethnic group in Syria, have reason to distrust the SNC because of its location in Turkey – a country that has been battling its own Kurdish separatist movement. In contrast, the Turks want the Muslim Brotherhood to rule the show. That spooks the liberals.

The irony is that most of these squabbling factions have no idea what’s unfolding on the ground. The SNC is detached from the Free Syrian Army (FSA), which claims to be in charge of the military side. In reality, even the FSA is more a label of convenience for local rebels than a unified fighting force.

This alphabet soup is thick enough to drown would-be peacemakers. If no one at the bottom follows orders from anyone above, why would they accept the outcome of the political dialogue we hope is around the corner?

This splintering is also a bad omen for Syria’s future. The regime is dominated by the Alawite sect of Islam to which the Assad family, its cronies, and key military commanders belong – but which comprises scarcely over a tenth of Syria’s population. The regime has cast itself as the protector of Syria’s minorities. In doing so, he’s turned Christians, Druze and Alawites into human shields. Assad’s prediction is simple: après moi, le deluge.

No single group, even with outside help, was able to dominate war-torn Lebanon because of its demographic balance. In Syria, however, Sunni Muslims make up three-quarters of the Syrian population. The spectre of a Sunni-dominated government, especially one that includes the most extreme strands of the opposition, is frightening to many Syrian minorities. Understandably, they fear retribution.

This has little to do with antiquated stereotypes of vengeful Arabs, and everything to do with the nature of civil war. We Europeans forget that French resistance groups slaughtered 10,000 people in the final stages and aftermath of the Second World War. In Italy, the death toll from reprisals ran to 15,000 and carried on for years.

Why would anyone think that Syria – a country in which the government itself is vigorously fanning sectarian flames – could escape more lightly in its struggle for freedom?

Then there’s the regional context. Some civil wars can be contained, but most are like raging fires – they give off sparks and smoke, and suck in oxygen from their surroundings.

The sparks are clear enough. Alawites and Sunnis are clashing in Lebanon’s cities, like echoes of their co-religionists across the border in Syria. To the north, Turkey has absorbed 25,000 refugees fleeing the violence – and Syria has been lobbing shells in their direction.

Then there are the outside forces reaching into Syria. The old cross-border networks once used by Al-Qaeda in Iraq (AQI) to pump fighters and weaponry from Syria into Iraq are being reactivated in reverse, to take advantage of Syria’s chaos.

Jihadists, with their combat experience and organisation, will become increasingly important parts of the anti-Assad resistance. That is a tragedy, because it obscures the democratic aspirations of most of the Syrian opposition. But many vulnerable Syrian groups will remember the ethnic cleansing of minorities in Baghdad after 2006. They might resist the major changes that are necessary to dismantle this regime.

If all this wasn’t intractable enough, consider the broader geopolitical struggle. The Sunni powers of the Middle East, Saudi Arabia above all, know that toppling Assad will remove Shia Iran’s only remaining friend in the Middle East.

But beware the theocratic dictatorship that promises freedom. There is little reason to think that Saudi Arabia is interested in Syrian democracy. These are hardly the noble International Brigades of the Spanish Civil War. Going by Saudi Arabia’s track record in places like Libya, Afghanistan and Pakistan, its arms and cash may not end up in the most savoury hands.

Turkey has hinted at intervention, but it’s unlikely to step up without allies in tow. The United States and Europe are rightly leery of stepping into the swamp. They understand that a limited military intervention would not be decisive. This month being the 20th anniversary of the start of the war in Bosnia-Herzegovina, we should recall that the half-measure of “safe zones” are rarely that safe. But a full-scale invasion would be catastrophic, for reasons that one need not elaborate in 2012.

Under the surface, the Assad regime is rotting. An orderly default would be nice, perhaps even at the cost of preserving parts of the regime to assuage minorities and appease Russia and China. In truth, this is looking impossible. When the ceasefire finally breaks, the steady Lebanonisation of Syria will continue.

*Shashank Joshi is an Associate Fellow at the Royal United Services Institute (RUSI). He is also a doctoral student of international relations at Harvard University’s Department of Government.