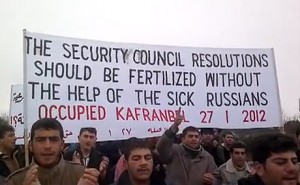 Russia’s U.N. envoy on Friday criticized a U.S.-drafted Security Council resolution authorizing an advance team of U.N. observers to monitor Syria’s fragile ceasefire and suggested it may take time to agree on a text.

Council envoys later on Friday planned to discuss a revised version of the U.S. draft, which calls for initial deployment of up to 30 unarmed observers to Syria. The latest draft, obtained by Reuters, highlights language Russia dislikes.

The draft was a response to Annan’s request that the council to move quickly to get the first members of an observer force that will ultimately have up to 250 monitors on the ground to lock in the country’s fragile ceasefire.

“Unfortunately we think there may have been some misunderstanding,” Churkin said about the two-page U.S. text before going into a council session on North Korea.

“Certainly the kind of draft that we see … requires a lot of work and it (is) not in line with our original understanding of doing something very quickly today in order to put some people on the ground, a limited number of people,” he said.

“I hope it can be done today,” he said, adding that it was possible the council would have to work over the weekend.

“The (U.N.) Department of Peacekeeping Operations is working around the clock to find the necessary number of troops for the full observer mission eventually,” he said.

“At the moment we have the advance team standing by to board planes and to get there, to get themselves on the ground as soon as possible,” he said.

A fragile U.N.-backed ceasefire aimed at halting more than a year of bloodshed in Syria appeared to be holding on Thursday, but forces loyal to Assad fought rebels near the border with Turkey on Friday, threatening the truce.

The latest draft would have the 15-nation council say Damascus should “ensure full and unimpeded freedom of movement throughout Syria for all (observer) mission personnel, including access, without prior notice, to any place or establishment that the mission deems necessary.”

It also calls for all sides to end the violence.

The draft includes language condemning “widespread, systematic, and gross violations of human rights … by the Syrian authorities (and urge that) those responsible for human rights violations shall be held accountable.” But the latest version puts that section in brackets, which diplomats said was because the Russian delegation objected to its wording.

Other Russian proposals include the insertion of calls on the opposition to cease fighting, as well as a softening of the demands on Damascus. The initial U.S. draft focused its appeals on the Syrian government, not the opposition, which diplomats said irritated Moscow.