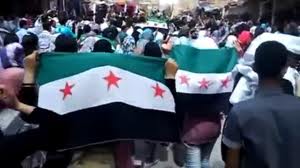 An advance team of about a dozen U.N. observers is ready to enter Syria, where the cease-fire has been “relatively respected” despite government troops and heavy weapons still in cities and continuing abuses, the spokesman for international envoy Kofi Annan said Friday.

The advance team is “standing by to board planes and to get themselves on the ground as soon as possible” once the U.N. Security Council gives approval for the mission as hoped when it meets in a closed session later Friday, Annan’s spokesman, Ahmad Fawzi told a news conference.

In the first major test of a U.N.-brokered truce, thousands of Syrians poured into the streets Friday for anti-government protests, activists said. Security forces responded by firing in the air and beating some protesters, but there was no immediate sign of widespread shelling, sniper attacks or other potential violations of the cease-fire.

“We hope both sides will sustain this calm, this relative calm,” Fawzi said.

Annan has asked the 15-nation Security Council to approve sending a U.N. observer mission to Syria as soon as possible. The council’s draft resolution being taken up by U.N. diplomats Friday would authorize an advance element of up to 30 unarmed military observers.

It would also demand the government ensure the monitor’s “full and unimpeded freedom of movement throughout Syria” and guarantee the mission’s ability to interview any individual “freely or in private.”

If the council gives its approval Friday, Fawzi said that an advance team of “around 10 or 12” observers, that could be ratcheted up to 30, would deploy quickly to prepare the way for a full mission. Additional Security Council approval would be required, he said, to put up to 250 observers on the ground.

Troops already in the region from Asian, African and South American countries could be used for the mission, Fawzi said.

Fawzi quoted Annan as telling the council during its two-hour closed-door briefing Thursday that “the continued presence of Syrian armed forces, including armor, in and around population centers, must end immediately. Violence in all its forms, including arbitrary arrests, torture and abductions, must stop.”

The new resolution would demand from President Bashar Assad’s government to withdraw its troops and heavy weapons from population centers, and reiterates its call for unimpeded access for humanitarian workers.

The demands are part of Annan’s six-point plan to stop the slide toward civil war and launch talks on a political transition.

Fawzi said the Syria government has agreed to the deployment of a U.N. observer mission.

Annan’s plan also calls for Syria to ensure freedom of movement for journalists. Fawzi said Syria’s government provided Annan with a list of 53 journalists who have been given visas to enter the country. Annan got a letter days earlier, Fawzi said, listing 21 organizations with entry visas.

Fawzi insisted that the truce is a first step on a long road to peace.

“This is only the beginning of a long road towards reconciling and towards building the future that Syrians aspire to, where there are no detentions without cause, where law enforcement guarantees peace and security in the street — not the military,” he said.

Clashes between Syrian troops and opponents are “not unusual,” he said. “Sometimes, in situations like this, the parties test each other.”