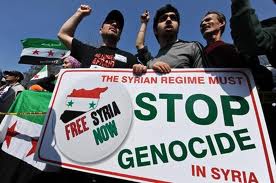 TWENTY DAYS have passed since the U.N. Security Council endorsed the Syria peace plan of former secretary-general Kofi Annan. It’s been eight days since Mr. Annan said the regime of Bashar al-Assad had agreed on a deadline of April 10 — Tuesday — to withdraw heavy weapons from cities, and five since the Security Council ratified that date. So the entirely predictable outcome of the initiative ought now to be recognized: Mr. Annan and his backers have merely provided cover for Mr. Assad to go on slaughtering his own people.

With the deadline looming, the regime has set new conditions for a cease-fire and has continued its assaults on residential areas with artillery and tanks. By the opposition’s count, more than 1,000 civilians have been killed since March 21, including several hundred over the past weekend.

the shortest way to the end of the Syrian crisis is the one Mr. Obama is resisting: military support for the opposition and, if necessary, intervention by NATO.

In a statement, Mr. Annan proclaimed himself “shocked” to discover that mass murder was still going on inside Mr. Assad’s establishment. But the Obama administration, whose U.N. ambassador called the Annan plan “the best way to end the violence,” had no excuse for such naievte — if that is the word for it. It was clear from the outset that Mr. Assad would never implement the U.N. terms, including a cease-fire and tolerance of peaceful assembly, because to do so would cause the collapse of his regime. Mr. Annan is merely the latest of a series of envoys made to look foolish by the Syrian dictator, including not a few Americans.

The question now facing the administration and the Security Council is also familiar: how to respond to Mr. Assad’s double-cross. The easiest, and sadly, probably most likely answer is to give Mr. Annan more time — while the killing continues. The Obama administration reportedly hopes that Russia, one of Mr. Assad’s biggest backers, will pressure him into making a deal with the opposition under Mr. Annan’s auspicies. But Russia seeks to preserve the Syrian regime; the idea that it would support a genuine transition to democracy, or that it could induce Mr. Assad to go along with one, is far-fetched.

It was clear from the outset that Mr. Assad would never implement the U.N. terms, including a cease-fire and tolerance of peaceful assembly, because to do so would cause the collapse of his regime.

The inescapable reality is that Mr. Assad will go on killing unless and until he is faced with a more formidable military opposition. That is why the shortest way to the end of the Syrian crisis is the one Mr. Obama is resisting: military support for the opposition and, if necessary, intervention by NATO. The administration has been inching in the right direction by providing non-lethal aid to the Free Syrian Army while tacitly consenting to the provision of arms by Saudi Arabia and Qatar. But reports from the ground say the opposition is not receiving anything close to the support it would need to change the military balance.

The best immediate step would be the creation of a protected zone on Syrian territory where civilian refugees could gather, and the Free Syrian Army could be organized and trained. The Turkish government has been hinting at its interest in this measure for weeks, but it needs the active support and encouragement of its allies, starting with the United States.

A civil war is taking place in Syria. Mr. Obama may believe that by fleeing from leadership through figments such as the Annan plan, he is avoiding “militarization.” In fact, he is ensuring that thousands more people will die.