Living on the edge of Syria's bloody war

by yalibnan
717
By Robert Fisk As Assad's troops fire shots across the border into Lebanon, the nation's religious factions remain bitterly divided on how to tackle their neighbour from hell: President Assad
Share: 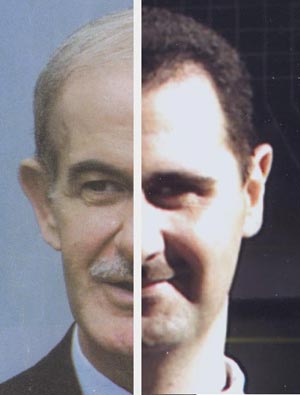 As Assad’s troops fire shots across the border into Lebanon, the nation’s religious factions remain bitterly divided on how to tackle their neighbour from hell: President Assad

Syria’s bloodbath is carving further divisions in Lebanon as President Bashar al-Assad’s Lebanese allies and enemies shout more and more insults at each other. The Christians have even divided among themselves, the old Phalangist leadership calling for Assad’s overthrow while the Catholic Maronite church performs its old role of fence-sitting on behalf of Syria’s minority Christians.

Only this week has the Maronite patriarch, Bechara Rai, had to re-explain himself for the umpteenth time after once more pleading for dialogue between Assad’s regime and the Syrian people – instead of denouncing the government in Damascus for its killings. What will the Sunni majority of Syria think of such foot-dragging when its own Sunni kinsmen in Lebanon support them? Or so the Christians have been asked.

No one, of course, has gone further in calling for Assad’s overthrow than Walid Jumblatt, the Druze leader who took the road to Damascus in 2010, only to denounce the Syrian authorities this month, adding that he knew they were responsible for his own father Kemal’s murder 35 years ago.

On the anniversary of the assassination, Mr Jumblatt laid the green-white-and-black flag of “Free Syria”on his father’s grave in the Chouf mountains – and you couldn’t get much more pointed than that in showing your disgust at the Syrian government.

“Long live free Syria,” he proclaimed. “A sane person cannot but support a political solution because the other options are a long civil war and a continuing attrition at all levels which do not befit the Syrian people who are demanding freedom, dignity and democracy… experience with the Syrian regime has taught us that it is skilled at the game of procrastination and stalling… The Syrian people will not back off after all their sacrifices… Only a transitional political solution that leads to the departure of this regime can end the crisis… The life of tyrants is short.”

The crisis came violently to life on the Lebanese border this week in the bleak countryside above the village of Al-Qaa when Syrian troops loyal to Assad fired machine guns into Lebanese territory, apparently at armed members of the opposition seeking sanctuary in the village. The Lebanese authorities claimed there had been no military “incursion” – which may be technically true – although the number of bullet holes in the poor village houses suggests this is more of a technicality than a truth. Residents said that “Free Syria Army” rebels had in fact attacked two Assad checkpoints, wounding three Syrian government soldiers, and that the Syrian army commandeered a van to take away the wounded.

As for Mr Jumblatt, he is an old friend of the old Soviet Union – but not so much of the new Russia, which is standing by its military and economic alliance with Damascus; yet he does see a need for Russian diplomacy in its “key role” as Assad’s supporter. The trouble is that Russia is interested in demonstrating Russian power rather than Russian compassion for all Syria’s people – which is why it sent an aircraft carrier to its only Mediterranean port of Tartous to show the flag. Oddly, the French have been doing very much the same; sending a helicopter carrier to Beirut to show their flag upon which, by the way, the Lebanese flag is modelled.

France is also showing its “understanding” of Lebanon’s “special position” in the Syrian crisis – Lebanon is not taking sides, which means that Lebanese antagonists of Assad can also condemn their own pro-Hezbollah government.

Alain Juppé, the French Foreign Minister, has also criticised Mr Rai for not giving his support to the opposition in Syria. “We Christians have been in this Levant for 2,000 years,” Mr Rai said in Cairo while attending the funeral of the Egyptian Coptic archbishop. “We have shaped it with our culture and values and we are open to all regimes which reach power through democracy.”

The problem here is that the Assad regime did not reach power through democracy but through a “corrective revolution” within the ruling Baath party. The Baath’s all-consuming power in the Syrian government has now officially been ended but the slowness of the changes infuriated even his Russian allies. And Russia will recover her position in Syria even if the regime does change – a fact admitted by the official Syrian opposition.

In Lebanon, the very closeness of the conflict – combined with the terrifying pictures of carbonised women and children in the Lebanese press (beyond anything seen in the West) – is creating enormous anger among both Assad’s admirers and his detractors. One newspaper here has compared Assad to Vlad the Impaler, Genghis Khan, Stalin, Hitler and Pol Pot – which is surely going too far (although there may be those in Homs who would agree with the paper).

Amid all the sound and fury and changing of sides – an essential act of all Lebanese politicians who want to survive – it is easy to forget that France, whose condemnation of Assad has been among the harshest, created this whole mess in the first place.

For it was those crusty Generals Gouraud and Weygand (the first armless and the second to become a Vichyite) who created – between the end of the First World War and the 1930s – four states in Syria, one for the Alawites, one for the Druze, one for Aleppo and one for the rest.

The Alawites, an offshoot of Shia Islam, are the minority religion of the Syrian President and most – though not all – of his closest entourage.

The State of the Alawites (for that is what it was called) had a capital in Lattakia, the very city to which Assad might flee if the Damascus regime collapsed. The old State of the Druze in the Houran is still the home of the Syrian Druze community; Mr Jumblatt is busy trying to advise them to join the revolution, which may be easier said in the Chouf mountains of Lebanon than the Houran hills of Syria.

Interestingly, letters attached to the Franco-Syrian treaties “de-creating” the four states into one national Syrian state in 1936 show French concern for the minorities and their fear that, “excessive centralisation” in Damascus could harm the people of Aleppo. Sunni Muslims, the French Foreign Minister told the League of Nations, were attached to the idea of a unitary state – which would give them a majority.

But that’s not quite the way it worked out, even if Mr Juppé remains ignorant of the details of the meddling which the French perpetrated in Lebanon and Syria – and which the British managed to make even more of a mess of a little further south.