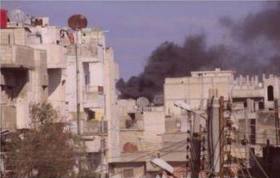 A Red Cross aid convoy prepared to enter the shattered Baba Amro district of Homs on Friday after a Syrian official declared the area “cleansed” and the opposition spoke of a massacre by President Bashar al-Assad’s forces.

The residential district became a symbol of resistance to Assad after government troops surrounded it with tanks and artillery and shelled it intensively for weeks, killing and wounding civilians cowering in its ruined buildings.

Rebels withdrew on Thursday in a key moment in the year-old uprising. An official at Syria’s Ministry of Foreign Affairs and Expatriates said the army had “cleansed Baba Amro from the foreign-backed armed groups of terrorists.”

Activists said Syria’s army had begun hunting down and killing insurgents who had stayed to cover their comrades’ retreat, although the reports could not be verified. They said 10 young men were shot dead on Friday.

In Geneva, the United Nations human rights body reminded Assad of his obligations under international law. “We are alarmed at reports starting to come out of the Baba Amro district of Homs after it was taken over by government forces yesterday,” spokesman Rupert Colville said.

Rami Abdelrahman, from the Syrian Observatory for Human Rights, said Syrian troops had entered Ain al-Baida, near the Turkish border and 100-150 rebels had fled the area.

One pro-government figure said troops had “broken the back” of the uprising and the rebel withdrawal heralded impending victory over what he termed a Western-backed insurgency.

In Beirut, the International Committee of the Red Cross (ICRC) said Syrian authorities had agreed that the Syrian Arab Red Crescent and the ICRC could enter Baba Amro to evacuate casualties and to take food and medicine to civilians trapped by the fighting and siege.

“We have positive indications from the Syrian authorities to go in. We are ready to enter Baba Amro to evacuate first the sick and wounded and to take food and medical supplies,” Samar al-Kadi, ICRC spokeswoman in Beirut, told Reuters.

The ICRC later said a convoy had reached Homs and was preparing to enter Baba Amro. The rebel Free Syrian Army (FSA) said on Thursday it was leaving the district — normally home to 100,000 residents. Only a few thousand people remain.

Conditions in the heavily bombarded district are hellish. TV footage showed heavy snow and freezing weather, with residents lacking electricity or fuel for heating. There is also a shortage of food and medical supplies.

Barely a building has escaped damage from artillery shelling and many are pock-marked with bullet holes.

In a rare show of unity withy Western powers, Russia and China joined other Security Council members at the United Nations in expressing “deep disappointment” at Syria’s failure to allow the U.N. humanitarian aid chief Valerie Amos to visit the country, and urged that she be allowed in immediately.

It was the first statement on Syria from the council, which has been deadlocked on the issue, since August last year. But it was not immediately clear how far Moscow and Beijing — hitherto Assad supporters — had shifted their position.

Russian Prime Minister Vladimir Putin appeared to distance himself further from Assad in an interview with a group of European editors, saying he had no special relationship with the president.

“It is up to the Syrians to decide who should run their country … We need to make sure they stop killing each other,” the London Times quoted Putin as saying on Friday.

France announced it would shut its Syrian embassy and was ready to step up support of the rebels if the UN Security Council cleared the way for such a move. British Prime Minister David Cameron said Syria’s rulers would be held to account.

“We need to start collecting the evidence now so that one day, no matter how long it takes, there will be a day of reckoning for this dreadful regime,” Cameron told reporters as he arrived for the second day of a summit of EU leaders in Brussels.

The European Union was planning to call for increased pressure on Assad, including sanctions, according to a draft of its conclusions. It was also preparing to urge the Arab League to convene a meeting of the Syrian National Council, which it said it recognised as a legitimate representative of the Syrian people.

The EU has over the past months been adding names to a list of people it sanctions with travel bans and asset freezes.

As news of the opposition pull-out from Baba Amro spread, video footage released on the internet appeared to show the bodies of American journalist Marie Colvin and French photographer Remi Ochlik being buried in Homs, where they were killed in shelling eight days ago.

The Syrian official said the bodies of Colvin and Ochlik were found by the Syrian authorities. French journalists Edith Bouvier, who was wounded in the same bombardment, and William Daniels arrived in Lebanon on Thursday, Sarkozy said, the last of a handful of reporters trapped in the city.

Armed rebels and defecting soldiers have been spearheading the revolt against Assad that began with largely peaceful protests inspired by the Arab Spring, but escalated after a government crackdown. According to activists, at least 17 rebels were killed with knives after they were chased into nearby fields.

As the drama unfolded in Homs, Taleb Ibrahim, a Syrian analyst close to the government, said the military’s operation in Homs “is the beginning of Syria’s final victory over the Qatari, Saudi, French, American and Zionist conspiracy against Syria.”

He said defeat for the rebels in Homs would leave the opposition without any major stronghold in Syria, easing the crisis for Assad, who remained confident he could survive.

President Assad, a London-trained eye doctor, is increasingly isolated internationally in his struggle to crush the armed insurrection.

Turkish President Abdullah Gul told Reuters on Thursday that Russia and Iran would soon realise they had little choice but to join international diplomatic efforts for Assad’s removal.

“I think in time Russia will see its support has been abused by the Syrian regime. They will recognise this fact when they see the heavy weapons being used against the people in Syria. That is not very tolerable, not even for Russia,” he said.

The United Nations says Syrian security forces have killed more than 7,500 civilians since the revolt began last March. Syria’s government said in December that “armed terrorists” had killed more than 2,000 soldiers and police during the unrest.