After the flight, Syrian refugees prepare to fight 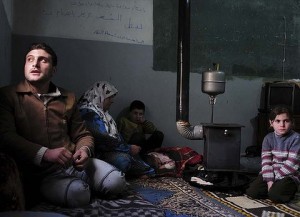 AT A school in a small mountain village near the Syrian border, now home to seven families of Syrian refugees, Abdel Hakim Abdullah is preparing to fight.

Four days ago he smuggled his family from the besieged town of Bab al-Amr in Syria to the relative safety of Wadi Khaled, in the north-eastern corner of Lebanon.

The 23-year-old defected from the Syrian army in June and joined the Free Syrian Army. He was due to cross back into Syria and reunite with his rebel battalion yesterday.

”When my commander asked me to fire on civilians outside a mosque in Damascus, I could no longer stay in the official army,” he says.

He acknowledges there is little the rebel soldiers can do against the forces of President Bashar al-Assad. They are mostly armed with Kalashnikovs, while the official army is using heavy weapons and tank fire against its people.

“For the moment all we can do is protect our towns as best we can and try to keep the civilian demonstrators safe. Without a buffer zone and other weapons we cannot do more than that.

“Syria is in a very critical situation. There are injured everywhere, there is so much bombing, buildings are demolished and people are lying hurt on the streets because it is not safe to go and retrieve them.”

Huddled around a small heater with his mother and little brother and sister, his young wife – cradling their toddler – is prepared for the struggle ahead.

“Of course I am afraid for him but at the same time if my husband and others do not go to fight, who will liberate Syria?” she says.

Mr Abdullah says there are about 40,000 soldiers in the Free Syrian Army, supported occasionally by collaborators from within the official army who are not yet prepared to desert.

“When we need to evacuate wounded from an area, they will sometimes tell us when it is safe to go,” he says.

In a worrying sign, reports indicate the Syrian Army has begun distributing gas masks to its soldiers, he says, leading civilians to fear not only the bombardment from tank shells and mortar fire, but chemical weapons as well. Crossing the border into Syria, only a couple of kilometres away, is always fraught with danger. The Free Syrian Army has cleared more than 200 landmines laid by the Syrian Army and closely monitors the soldiers’ actions. But safe passage is never guaranteed.

“We always cross at night, in the mist,” Mr Abdullah says. “That way it is harder for them to detect us.” It is hard not to wonder how long his luck will hold out.

Mr Abdullah is prepared to show his face to the world. He says the Syrian officials know who he is and there is no point hiding any more. Others remain deep in cover.

Winding higher up into the mountains through driving winter rain and sleet, passing through village after village, the Herald is taken to visit several Syrian refugee families living in the back of half-built houses, too frightened even to turn on a light in case it reveals their presence.

They say there has been a spate of kidnappings – Lebanese operatives taking fighters from the Free Syrian Army and delivering them to Syrian intelligence services. There are also reports of the Syrian Army entering the area to snatch deserters and return them to Syria. Most are not heard from again.

As the bombardment of Homs enters its seventh day and the toll of dead and injured climbs, more and more refugees are making the dangerous crossing into Lebanon.

Radwan Mahli’s family was threatened with torture and death when he publicly renounced his membership of the ruling Baath party.

“They burnt my work, my shop, then they torched my house, and later they kidnapped my brother,” he says. He fled with his family to Lebanon several months ago. They live in a room at the back of a small shop high up in the mountains.

His brother, Walid Ahmed Mahli, 40, did not live to make the journey. Last week his throat was slit by pro-Assad forces as punishment for leaving the party.

The family is still in shock, their faces a study in fierce grief as Mr Mahli calls up his brother’s picture on his mobile phone. His sisters and other brother are still in Syria, in a town surrounded by the Syrian Army. At the moment, there is no hope of escape.

Meanwhile, sectarian clashes between Sunnis and Alawites spilt across into Lebanon’s second city, Tripoli, where three were killed and 23 wounded in fighting which began on Friday.