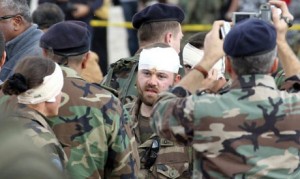 The attack on Friday against the French peacekeeping forces in the southern Lebanese city of Tyre was condemned by many Lebanese leaders.

MP Marwan Hamadeh , a key member of March 14 opposition blamed Damascus for the attack saying it was orchestrated with the help of its ally Hezbollah.

“It is clear that Syria was behind what happened today and the messenger was Hezbollah,” Hamadeh told AFP. “Nothing happens in that region without Hezbollah’s approval.”

He added the fact that the blast took place near a Palestinian refugee camp was only aimed at sowing confusion.

“The Syrians have accused France of being at the forefront of what they believe is a foreign plot to destabilize their country and everyone felt that something was bound to happen,” Hamadeh said.

President Michel Suleiman who is currently in Armenia on an official visit condemned on Friday the explosion that targeted a French UNIFIL vehicle.

Suleiman said that “the explosion is an attempt to force the French battalion to leave Lebanon.”

“France, which sacrificed a lot for Lebanon and the world peace, will not yield to these terrorist attacks.” he added

He also said that security forces will cooperate to catch and punish the assailants.

Prime Minister Najib Mikati also condemned on Friday the attack against the UNIFIL patrol , saying such bombings would not affect the mission of the peacekeepers.

“These crimes don’t only target the international (peacekeeping) forces but also the security and stability of all Lebanon and the south,” Miqkati said as he headed a meeting of top security officials at the Grand Serail.

He stressed that these attacks will not “affect the work of UNIFIL in the South nor its commitment to the implementation of U.N. Security Council resolution 1701.”

Mikati demanded a swift investigation into the attack.

Speaker Nabih Berri who is closely allied with Hezbollah and Syria also condemned on Friday the attack :

“The terrorist attack that targeted the UNIFIL forces aims at destabilizing Lebanon and the South,” a statement issued by Berri’s office said.

The speaker noted that the “bombing (only) serves the Israeli” intentions aimed at committing “genocides” and violations in southern Lebanon.

He called on the army and the security institutions to exert all efforts “to find who is behind this terrorist crime.”

A roadside bomb wounded five French peacekeepers in southern Lebanon on Friday, in the third attack this year on United Nations forces deployed near the frontier with Israel. The blast hit a jeep carrying French UNIFIL troops on the outskirts of the Mediterranean port city of Tyre. “I can confirm that a UNIFIL vehicle was hit by an explosion in Tyre,” UNIFIL spokesman Andrea Tenenti said. “Five peacekeepers were injured.”

Photo: Wounded French U.N. peacekeepers of the United Nations Interim Force in Lebanon (UNIFIL) are seen after receiving treatment near the site where a bomb exploded on the outskirts of the city of Tyre, southern Lebanon December 9, 2011. The bomb exploded near a UNIFIL peacekeeping patrol on Friday, wounding five French soldiers in southern Lebanon, a witness and security sources said. (Photo:Reuters)