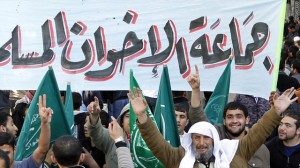 Islamists claimed a decisive victory on Wednesday as early election results put them on track to win a dominant majority in Egypt’s first Parliament since the ouster of Hosni Mubarak, the most significant step yet in the religious movement’s rise since the start of the Arab Spring.

The party formed by the Muslim Brotherhood, Egypt’s mainstream Islamist group, appeared to have taken about 40 percent of the vote, as expected. But a big surprise was the strong showing of ultraconservative Islamists, called Salafis, many of whom see most popular entertainment as sinful and reject women’s participation in voting or public life.

Analysts in the state-run news media said early returns indicated that Salafi groups could take as much as a quarter of the vote, giving the two groups of Islamists combined control of nearly 65 percent of the parliamentary seats.

That victory came at the expense of the liberal parties and youth activists who set off the revolution, affirming their fears that they would be unable to compete with Islamists who emerged from the Mubarak years organized and with an established following. Poorly organized and internally divided, the liberal parties could not compete with Islamists disciplined by decades as the sole opposition to Mr. Mubarak. “We were washed out,” said Shady el-Ghazaly Harb, one of the most politically active of the group.

Although this week’s voting took place in only a third of Egypt’s provinces, they included some of the nation’s most liberal precincts — like Cairo, Port Said and the Red Sea coast — suggesting that the Islamist wave is likely to grow stronger as the voting moves into more conservative rural areas in the coming months. (Alexandria, a conservative stronghold, also has voted.)

The preliminary results extend the rising influence of Islamists across a region where they were once outlawed and oppressed by autocrats aligned with the West. Islamists have formed governments in Tunisia and Morocco. They are positioned for a major role in post-Qaddafi Libya as well. But it is the victory in Egypt — the largest and once the most influential Arab state, an American ally considered a linchpin of regional stability — that has the potential to upend the established order across the Middle East.

Islamist leaders, many jailed for years under Mr. Mubarak, were exultant. “We abide by the rules of democracy, and accept the will of the people,” Essam el-Erian, a leader of the Brotherhood’s new party, wrote in the British newspaper The Guardian. “There will be winners and losers. But the real — and only — victor is Egypt.”

Results will not be final until January, after two more rounds of voting. And the ultimate scope of the new Parliament’s power remains unclear because Egypt has remained under military rule since Mr. Mubarak resigned as president in February. But Parliament is expected to play a role in drafting a new Constitution with the ruling military council, although the council has given contradictory indications about how much parliamentary input it will allow.

The emergence of a strong Islamist bloc in Parliament is already quickening a showdown with the military. Brotherhood leaders announced Wednesday that they expected the Islamist parliamentary majority to name a prime minister to replace the civilian government now serving the military. In response, a senior official of the military-led government insisted that the ruling generals would retain that prerogative.

The unexpected rise of a strong ultraconservative Islamist faction to the right of the Brotherhood is likely to shift Egypt’s cultural and political center of gravity to the right as well. Leaders of the Brotherhood’s Freedom and Justice Party will likely feel obliged to compete with the ultraconservatives for Islamist voters, and at the same time will not feel the same need to compromise with liberals to form a government.

“It means that, if the Brotherhood chooses, Parliament can be an Islamists affair — a debate between liberal Islamists, moderate Islamists and conservatives Islamists, and that is it,” Michael Wahid Hanna, an Egyptian-born researcher at the Century Foundation in Cairo, said this week.

The ultraconservative Salafi parties, meanwhile, will be able to use their electoral clout to make their own demands for influence on appointments in the new government. Mr. Hanna added: “I don’t mind saying this is not a great thing. It is not a joyous day on my end.”

If the majority proves durable, the longer-term implications are hard to predict. The Brotherhood has pledged to respect basic individual freedoms while using the influence of the state to nudge the culture in a more traditional direction. But the Salafis often talk openly of laws mandating a shift to Islamic banking, restricting the sale of alcohol, providing special curriculums for boys and girls in public schools, and censoring the content of the arts and entertainment.

Their leaders have sometimes proposed that a special council of religious scholars advise Parliament or the top courts on legislation’s compliance with Islamic law. Egyptian election laws required the Salafi parties to put at least one woman on their electoral roster for each district, but they put the women last on their lists to ensure they would not be elected, and some appear with pictures of flowers in place of their faces on campaign posters.

Sheik Hazem Shouman, an important Salafi leader, recently rushed into a public concert on the campus of Mansoura University to try to persuade the crowd to turn away from the “sinful” performance and go home. He defended his actions on a television talk show, saying he had felt like a doctor making an emergency intervention to save a patient dying of cancer.

The new majority is likely to increase the difficulty of sustaining the United States’ close military and political partnership with post-Mubarak Egypt, though the military has said it plans to maintain a monopoly over many aspects of foreign affairs. Islamist political leaders miss no opportunity to criticize Washington’s policies toward Iraq, Afghanistan, Israel and the Palestinians. And while Brotherhood leaders have said they intend to preserve but perhaps renegotiate the 1979 Camp David peace treaty with Israel, the Salafi parties have been much less reassuring. Some have suggested putting the treaty to a referendum.

Speaking on the condition of anonymity, an Israeli official acknowledged concerns: “Obviously, it is hard to see in this result good news for Israel.”

Some members of Egypt’s Coptic Christian minority — about 10 percent of the population — joked Wednesday that they would prepare to leave the country. Previously protected by Mr. Mubarak’s patronage, many have dreaded the Islamists’ talk of protecting the Islamic character of Egypt. Some Brotherhood leaders often repeat that they believe citizenship is an equal right of all regardless of sect, even chanting at some campaign rallies that Copts are also “sons of Egypt.” But Salafis more often declare that Christians should not fear Islamic law because it requires the protection of religious minorities, an explanation that many Christians feel assigns them second-class status.

Most Copts voted for the liberal Egyptian bloc, which was vying for second place with the Salafis in some reports. It was an eclectic alliance against the Islamists, dominated by the Social Democrats, a left-leaning party with ties to the revolution’s leaders, and by the Free Egyptians, the business-friendly party founded and promoted by Naguib Sawiris, the Coptic Christian media-and-telecommunications tycoon.

The results indicated that some of the candidates and slates put forward by the former ruling party appeared to have won back their seats. It was unclear how large a bloc they might form, but they could prove sympathetic to the familiar mantra of stability-above-all that the ruling military is putting forward.