US Urges Americans to Leave Syria as its Aircraft Carrier Approaches 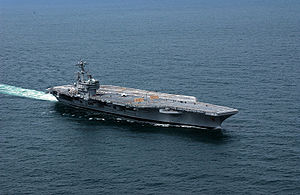 As the violent crackdown against Syrian dissidents continues, the US government is warning all American citizens in the country to leave immediately, according to CBS. Turkish citizens are also being warned to stay out of the country. The US ambassador to Syria, Robert Ford, was pulled from that country last month.

The U.S. embassy continues to urge U.S. citizens in Syria to depart immediately while commercial transportation is available,” began a statement released Wednesday on the embassy website. “The number of airlines serving Syria has decreased significantly since the summer, while many of those airlines remaining have reduced their number of flights.”

Meanwhile, Tyler Durden at Zero Hedge notices that according to Stratfor, the “CVN 77 George H.W. Bush has left its traditional theater of operations just off the Straits of Hormuz, a critical choke point, where it traditionally accompanies the Stennis, and has parked… right next to Syria.”

What does all this mean?

Well, the initial success of the mission in Libya may be giving leaders in the Western world the confidence boost they need to initiate yet another intervention.

Of course, any intervention into Syria will prompt an Iranian response. War with Syria and Iran would make the Iraq War look like a leisurely stroll along the Tigris.

Are we going to war with Syria? It’s much too early to say, but the ominous warnings to leave the country, the sudden arrival of the aircraft carrier, and the increasing tension in Syria along with the inability of anyone to force Syria’s hand makes it look increasingly, and frighteningly, more likely.