AL chief: Everything must be done to stop bloodshed in Syria 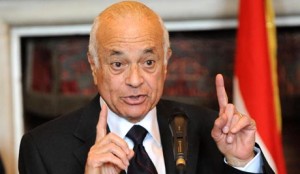 France recalled its ambassador to Syria today, after its diplomatic missions there were attacked amid ongoing protests against Bashar al-Assad’s regime.

“There has been renewed violence in Syria, which has led me to close our consular offices in Aleppo and in Latakia, as well as our cultural institutes and to recall our ambassador to Paris,” Foreign Minister Alain Juppe told the French parliament.

“Everything must be done to stop the ongoing bloodshed in Syria,” Nabil al-Arabi told reporters on the sidelines of the meeting, which was called to discuss the Syrian crisis.

Arabi said he hoped that Arab moves to send observers to Syria, where a crackdown by Bashar al-Assad’s regime is being met with resistance from army deserters after the death of at least 3,500 people, would bear fruit within days.

But he reiterated that no observers would be sent before a clear agreement is signed between the Arab League and Damascus, which has failed to implement an earlier plan on ending the violence.

The pan-Arab body, which voted last weekend to suspend Syria’s membership and take other sanctions against Assad’s regime, had agreed to send 500 members of human rights groups, media representatives and military observers to the country.

Syrian army defectors attacked an intelligence complex on the edge of the capital over fears that the country would boycott today’s meeting.

Members of the Free Syrian Army fired shoulder-mounted rockets and machineguns at a large Air Force Intelligence complex situated on the northern edge of the capital on the Damascus-Aleppo highway at about 2:30am (0030 GMT).

At least eight soldiers and security forces were killed in the assault.

The attack was the first such reported assault on a major security facility in the eight-month uprising against Assad, activists said.

Syria on Sunday said it would welcome the dispatch of an “Arab ministerial delegation accompanied by observers, civilian and military experts and Arab media,” according to an official statement.

It said the delegation would be able to see for itself the situation on the ground “and supervise, in co-ordination with the Syrian government, the application of the Arab (peace) plan.”

Syria also called for an urgent Arab summit to discuss the crisis, but this was vetoed by Gulf states.

The summit comes four days after the Arab League decided to discipline Syria for pursuing the crackdown instead of implementing an Arab peace initiative.