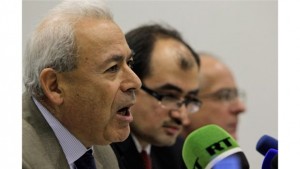 The Arab League, stung into action by months of bloodshed in Syria, met opponents of President Bashar Al-Assad on Tuesday, a day after violence in his country claimed 69 more lives.

The League, which has voted to suspend Syria’s membership from Wednesday, asked Syrian opposition groups to draw up their plans for a transition of power, as a prelude to a wider gathering on Syria’s future planned by the Cairo-based body.

“The Arab League will announce soon a date for a conference to include many of the Syrian opposition groups to discuss the ways and time needed to move to a transitional period,” Abdel Basset Sedah, of the opposition Syrian National Council’s executive office, told Reuters after meeting League officials.

After months of hesitation, the League decided on Saturday to discipline Syria for pursuing a violent crackdown on dissent instead of implementing an Arab peace initiative. It has stopped short of calling for Assad’s departure or proposing any Libya-style foreign military intervention in Syria.

Hundreds of Syrians have been killed this month in one of the bloodiest periods of the revolt, inspired by uprisings which have overthrown leaders in Tunisia, Egypt and Libya.

Damascus says it is committed to the Arab peace initiative, which calls for a cease-fire and dialogue with the opposition.

Upset by its imminent suspension from the Arab League, it has requested an emergency Arab summit, but an influential Saudi-led bloc of six Gulf Arab states rejected the idea, which would need the support of 15 of the League’s 22 members.

Morocco’s foreign minister said “Syrian colleagues” would be welcome at a meeting on Wednesday of Arab foreign ministers in Rabat, but did not specify if Syria’s top diplomat could attend.

Arab ostracism is a particularly bitter blow for Assad, who has always seen himself as a champion of Arab unity.

Joining the chorus of criticism, UN Secretary-General Ban Ki-moon said during a visit to Bangladesh: “President Bashar should stop immediately the killing of his own people.”

The United Nations says more than 3,500 people have been killed since protests against 41 years of Assad family rule began in March. The government blames armed gangs sponsored from abroad for killing at least 1,100 troops and police.

Russia, one of Syria’s last few foreign friends, hosted talks with the Syrian National Council and urged it to hold a dialogue with Assad’s government. The opposition group responded by pressing Moscow to join calls for the Syrian leader to quit, Russia’s Interfax news agency reported.

Russia joined China last month to block a UN Security Council resolution that would have condemned Assad’s crackdown, and has accused the West of discouraging dialogue in Syria.

Turkish Prime Minister Tayyip Erdogan, who had fostered close ties with Syria before this year’s unrest, warned Assad that his government was on a “knife-edge” and demanded an apology for attacks on Turkey’s diplomatic missions in Syria.

Erdogan has yet to unveil promised sanctions against Syria, but his country now hosts the main Syrian opposition and has given refuge to Syrian civilians and defecting soldiers.

“Nobody now expects the (Syrian) people’s demands to be met. We all want the Syrian administration, which is now on a knife-edge, to turn back from the edge of the cliff,” he said.

While no sanctions have been announced, Turkey’s energy minister suggested power supplies to Syria might be affected.

“Right now we are supplying electricity there (Syria). If this course continues, we may have to review all of these decisions,” Taner Yildiz told reporters.

Turkish Foreign Minister Ahmet Davutoglu said his country wanted sanctions that would not harm the Syrian people after Assad’s government had rejected a last chance to change course.

“The Syrian regime does not want to listen to the demands of its people,” he told a news conference in the Moroccan capital. “Unfortunately, it still shoots its own people.”

Violence in Syria has not abated. Activists reported at least 69 deaths in southern Syria on Monday, most in clashes between loyalist troops and army deserters.

The Syrian Observatory for Human Rights said 34 soldiers and security men were killed in clashes with suspected army deserters who attacked military vehicles in the south.

At least 12 attackers were also killed, the British-based Observatory said, while another 23 people died in “gunfire from security and military checkpoints” in southern villages.

Syria has barred most foreign media, making it hard to verify accounts from authorities and activists. Syria’s state news agency did not mention clashes in the south on Monday.

To offset the impact of Western sanctions, Syria plans to strengthen economic ties with Asian and African countries, its economy and trade minister told an Egyptian newspaper.

“We have a lot of options … including Mercosur (Latin American bloc) countries, Russia, Belarus, Kazakhstan, Africa and some countries from Southeast Asia,” he said.

Many analysts expect Syria’s economy to shrink this year, perhaps by several percent or more.