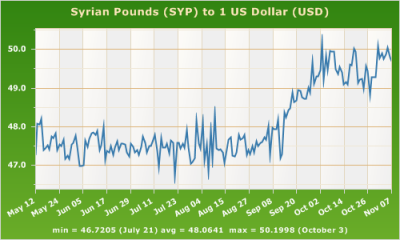 Back in May, some observers suggested that if Syrian protesters don’t topple President Assad, then the economic cost of the uprising would. Six months later, Assad shows no signs of either falling or leaving. But with protesters increasingly turning to violent resistance and the escalating conflict drawing in Turkey and Lebanon, attention is turning back to how much more Syria’s already vulnerable economy can withstand. Answering that question will give a good indication of how much longer President Assad can hold on.

Syria’s economy is starting to feel the pressure of eight months of violence in which an estimated 3000 people have died and thousands more have been injured. A recent Geopolity report suggests public expenditure in 2011 has already increased by 18.9 billion US dollars, attributed to increasing military costs, while public revenue has decreased by 2.31 billion dollars, giving a total cost to public finances of 21.2 billion dollars. Cargo volumes passing through Syrian ports declined by 35-40 percent in the first eight months of 2011, and the overall cost to the economy is estimated at 6.1 billion dollars, or 4.5 percent of GDP.

Back in May, some observers suggested that if Syrian protesters do not topple President Assad, then the economic cost of the uprising would. Six months later, Assad shows no signs of either falling or leaving. But with protesters increasingly turning to violent resistance and the escalating conflict drawing in Turkey and Lebanon, attention is turning back to how much more Syria’s already vulnerable economy can withstand. Answering that question will give a good indication of how much longer President Assad can hold on.

Probably the most visible sign of Syria’s economic woes is the collapse of its tourism industry. In July 2009 visitor numbers were up 24 percent on from the same time the year before, despite the global financial crisis. In 2010, visitors number rose by another 2.5 million on 2009, or 42 percent. These were boom years and handsome reward for thawing relations with the West, relaxing visa restrictions for visitors from Iran and Turkey, and investing in facilities and services. Tourism became Syria’s second largest source of foreign income.

When Dominic Strauss-Kahn, then still head of the International Monetary Fund, predicted in early April that a tourism slump would hit hard in Tunisia and Egypt, he could have mentioned Syria too. In recent months, tourism has collapsed, with sanctions, embargos, travel restrictions and advisories, and no end of bad press keeping tourists away. Hotel occupancy rates are close to zero and traders in key tourist destinations are not hopeful their customers will return soon. At least not the British, Dutch, and Italians who flocked to Damascus’ Old City and the ancient ruins of Palmyra during the boom years. As Minister of Tourism Lamiya Assi put it in late October, Syria is looking towards countries “that haven’t espoused any anti-Syria political stance and don’t have political agendas.”

The collapse of Syrian tourism illustrates the basic problem of the growing economic crisis. With established foreign markets no longer functioning, the government is forced to find new markets to supplement depleted foreign currency reserves. In the meantime, the government has pledged to increase public spending to protect ordinary Syrians, notably by increasing subsidies (diesel is currently subsidized at 25 percent) and indefinitely delaying planned cuts, even as government revenue is falling.

In early September the EU embargoed imports of crude oil from Syria. The measure, effective from 15 November, will wipe out Syria’s oil market. Previously, the EU accounted for 95 percent of Syria’s oil exports, with between 80-90 percent of that ending up in refineries in France, Germany and Italy. With those refineries closed to Syrian oil, Syria is looking towards Asia. But with prospective buyers well aware Syria has no-one else to sell to, Syria can expect demands for hefty discounts of up to 25 percent.

In early November, Petroleum and Mineral Resources Minister Sufyan Allaw was quoted as saying oil production had fallen from 380 thousand barrels per day to between 250 and 270 thousand barrels, a 20-25 percent reduction. He blamed US and EU sanctions. Mr. Allaw can take a measure of comfort in some independent forecasts that predict average production in 2012-2013 will recover to 364,000 barrels per day, but the fine print warns this improvement is conditional on political stability returning.

In September, Syria held about 18 billion dollars in foreign exchange reserves, according to Syrian Central Bank governor Adib Mayaleh. But with 1.2 billion of those reserves earmarked for postponed EU projects, coupled with decreasing exports, EU sanctions, and rising costs associated with quelling the uprising, the Ministry of Economy and Trade under Minister Mohammed Nidal Al-Shaar calculated the government faced a cash flow problem. How serious this problem was is unclear, although the dramatic course of action they chose, factoring in its political cost, suggests it was more serious than outside observers thought at the time.

In September the government banned all imported goods that attracted a tariff of five percent or more. The ban on such everyday goods as cars, textiles and electronics amounted to 25 percent of Syria’s imports and would save 6 billion dollars, including 4.5 billion for cars, according to Govenor Mayaleh.

But if the regime calculated the immediate benefits of currency savings outweighed the longer-term costs of depressed private consumption and increased inflationary pressure, it miscalculated popular anger. After only two weeks, Mr. Nidal Al-Shaar lifted the ban, admitting the move “had more negative repercussions than expected.” Yet the damage was already done and the sense of siege among ordinary Syrians has not lifted as easily.

The search for markets

The original problem of a listing balance sheet remains, although conserving foreign reserves was only ever a halfstop measure to buy time while the trade ministry sought new markets. The central bank’s decision in October to add the Russian ruble and Chinese yuan to its list of convertible currencies goes a long way towards facilitating trade and suggests where the search is heading. Whether crude oil or its impressive archaeological heritage, Syria must find new markets for its money-spinning exports.

Amid all the uncertainty, it is clear that Syria has crossed a line. As with the long struggles in Egypt, Libya, and still in Yemen, it seems unlikely that protestors will accept anything less than the removal of the president. An Arab League-brokered peace plan seems unlikely to quell resistance. As long as the violence continues, Syria’s economy will continue feeling the squeeze of sanctions, closed markets, decreased revenues, and the range of knock-on effects, from depleted foreign exchange reserves to increasing joblessness. It will be increasingly difficult for Assad’s government to pull itself out of the economic spiral.

* Thomas Alberts is a PhD candidate at the School of Oriental and African Studies (SOAS), London. From Cape Town, South Africa, Thomas has previously written about South African political history, human rights, and legacies of apartheid. He is based in London.