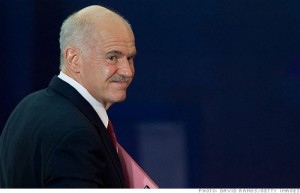 Greek Prime Minister George Papandreou is expected to resign after the makeup of the nation’s new coalition government is decided, a spokesman for Papandreou’s Socialist PASOK party said Sunday, according to Greek media.

The country’s Cabinet was set to meet Sunday to discuss issues relating to Monday’s Euro group meeting, at which Finance Minister Evangelos Venizelos will represent Greece, the reports quoted the spokesman as saying.

Venizelos is likely to remain in his post as finance minister in a new government, sources told Greek television. Candidates for the prime minister’s job include Petros Moliviatis and Loukas Papaimos, according to Greek television.

Venizelos is likely to remain in his post as finance minister in a new government, sources told Greek television. Candidates for the prime minister’s job include Petros Moliviatis and Loukas Papaimos, according to Greek television.

The new government will have a life of four months, according to Greek television, citing sources, and elections will be held in early spring.

The announcement comes amid economic and political turmoil in Greece and the formation of a coalition government tasked with saving the nation from bankruptcy.

A Greek default could drag down larger European economies, in particular those of Italy and Spain, as well as struggling Portugal and Ireland, analysts warn.

Papandreou started talks with smaller parties, and met with the president to seek permission to form a coalition.

The president summoned party members ahead of Sunday’s Cabinet meeting.

“I can sense the agony of the Greek people,” opposition leader Antonis Samaras said before the meeting. “Everybody has to act responsibly now and send a message of stability abroad to the people of Europe and the people of our country too.”

“I agree completely with your words,” Papoulias said. “We should give an end to this sense of insecurity and instability. We should give answers to the questions: where are we going and what are we doing? We are all responsible for that.”

Speaking briefly to reporters after the meeting, Samaras said that once Papandreou resigns, everything will “take its course” and “everything else is negotiable.”

The vote of confidence gives Greece’s stricken economy some breathing room and may reassure international markets sent into a tailspin by political turmoil in the nation.

But many questions remain unanswered.

The main opposition party has showed little willingness to join the unity government, with Samaras making it clear he did not want to be part of a coalition. In forming the new government, the PASOK party will likely seek the support of smaller parties.

Samaras has called for a transitional government for six weeks, followed by elections.

“We need to have an agreement during the course of today for a new coalition government, and we need to specify by tomorrow, Monday, the name of the new prime minister,” PASOK spokesman Elias Mosialos told Greek television Sunday.

Both of the big parties, PASOK and New Democracy, should participate in the coalition government, he said, and if that is successful, then smaller parties could join as well.

Though Papandreou won the confidence vote after announcing he would seek a coalition government, it was not immediately clear who would lead it.

Venizelos has called for a temporary government that would push through all the necessary legislation through February with elections likely to follow.

Papandreou said holding elections immediately would leave the latest bailout deal “up in the air.” Implementing the controversial bailout package reached October 27 is a priority, the prime minister said, to ensure Greece stayed in the euro, the single currency used by the 17 nations in the eurozone.

European leaders have warned they want Greece to stay in the euro, but saving the currency is more important.

The deal would wipe out €100 billion in Greek debt, half of what it owes. It comes with a promise of €30 billion from the public sector to help pay off some of the remaining debts, making the whole deal worth €130 billion ($178 billion).

But the package comes with strings that would require Greece to slash government jobs, privatize some businesses and reduce pensions. Such austerity measures run the risk of deepening Greece’s recession, said Antonis Papagiannidis, editor of Greece’s Economic Review.

Though Greece ranks 32nd in terms of gross domestic product, experts say it wields a disproportionate influence on world markets.