by yalibnan
2171
The beleaguered opponents of the Assad regime have dispatched an urgent "SOS" to the international community pleading for help to stop the slaughter in Syria's cities at the hands of Bashar al Assad's security forces.
Share: 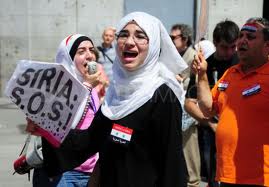 The beleaguered opponents of the Assad regime have dispatched an urgent “SOS” to the international community pleading for help to stop the slaughter in Syria’s cities at the hands of Bashar al Assad’s security forces. Elements of the opposition, including the Syrian National Council, have appealed for unspecified international intervention (and some have actually pleaded for NATO to impose a no-fly zone over Syria), but their pleas are being met by a painful silence. The voices that demanded urgent action to stop Col. Gadaffi from committing a humanitarian catastrophe in Benghazi can’t seem to muster the same level of concern for the Syrian people.

What is going on here? What makes the Syrian people apparently less deserving of concerted international action than their Libyan fraternal brothers is a tragic tale of two cities.

In an ironic twist of fate the Syrian people are the victims of NATO’s success in Libya. NATO was able to drive an air force through UN Security Council Resolution 1973 by transforming it from authority to protect Libyan civilians encircled in Benghazi to a license to support regime change. The Russians and Chinese would have none of that again in Syria — even when presented with clear evidence of Assad’s atrocities in Homs and other restless Syrian cities. They jointly vetoed a cream puff of a resolution on Syria — derailing any hope of UN consensus given their aversion to the NATO’s Libyan mission creep. Assad and his cronies considered the UN’s inaction as a license to kill.

And the Arab League, which provided cover for Qatar and Egypt to support NATO’s intervention, is merely threatening to expel Syria from the Arab League if Assad refuses to withdraw Syrian military from his cities — a promise he has repeatedly broken.

Between Chinese and Russian diplomatic chicanery, a news blockade preventing daily media coverage, and an absence of international consensus supporting anything beyond uncoordinated economic sanctions, courageous Syrians are largely on their own in their showdown against overwhelming regime firepower — setting up a perfect storm for international inaction.

Adding to Syrian despair is the fact that very little is heard from the think tanks and many Mid East media commentators in Washington, London and Paris that bombarded their respective governments with urgent demands to intervene in Libya to prevent exactly the same killing fields that Assad’s forces are creating every hour and every day. It’s almost as if Assad has been granted some inexplicable “media immunity.” Here in the Middle East where I have been for about 5 days events in Syria on regional and international television stations garner less attention than a car bomb in Baghdad or a rocket attack from Gaza into Israel. If it’s because the Syrian bloodshed just endlessly grinds on whether 30, 300, or 3000 are killed, Assad is winning a propaganda war he must surely lose.

Assad actually believes he can act with relative impunity. In the ten days since the double UNSC veto Assad has:

1- Killed over 200 protesters; bringing the number of Syrians killed since the popular uprising began to over 3,250 and injured untoward thousands.

2- Deployed his heavy artillery to pulverize every city that has dared to support protests against the regime.

3- Driven a very courageous U.S. ambassador from his post by threatening bodily harm to him and other American diplomats in Damascus.

5- Threatened to retaliate against any government that intervenes in Syria.

The one country that has taken the bull by the horns is Turkey, where Turkish Prime Minister Erdogan takes Assad’s double crosses personally. Turkey, which had invested considerable capital in Assad, has done a 180 against him. Turkey is not only about to imposed punishing economic sanctions against Syria, but it is also granting safe-haven to the nascent Free Syria Army composed of Syrian Sunni military defectors who are launching attacks against Syrian forces loyal to Assad from across the Turkish-Syrian border.

Adding to mess is the fact that Syria’s opposition is not itself united in its goals and tactics, and there is no evidence that Assad’s security forces are crumbling or that the populations of Syria’s two largest cities — Damascus and Aleppo — are prepared to revolt en mass.

As much as I agonize over the plight of Syria’s unarmed democratic protesters, I empathize with the White House’s Syrian dilemma. Military intervention, including a no-fly zone, may trigger wider Middle East hostilities given Iran’s and Hezbollah’s alliance with

Assad. NATO is not exactly in the mood to replicate its Libya mission. Western military intervention would lack international legal authority. U.S. allies on Syria’s border — Turkey, Israel and Jordan, take Assad at his word that he will create as much regional mischief as possible if some form of a “coalition of the willing” dared to impose a no-fly zone.

So short of imposing a no-fly zone what, if anything, can the U.S. and its allies do to turn further turn the screws on Assad aside from more toothless symbolic gestures?

1- Commence the necessary steps to lay the groundwork for formally recognizing the Syrian National Council and accord it the same incubation support NATO gave Libya’s Transitional National Council in its early days – the first step in a long process of delegitimizing the Assad regime.

2- Provide Turkey with the financial, diplomatic and military support it needs to buttress its support for the Syrian Free Army and its hosting of the Syrian National Council.

3- Maintain diplomatic pressure in the UN against Syria despite Russian and Chinese objections. Syria’s latest violations of international law in Lebanon by abducting Lebanese and Syrian citizens critical to the regime is just the latest case in point. Keeping media focused on Syria is essential, and Assad must be forced to pay a diplomatic and media price for forcing Amb. Ford from Damascus under threat of violence.

Whether Assad’s regime implodes sooner rather than later will not be as a consequence of international intervention but as a result of the willingness of Syria’s army conscripts and its mercantile families to finally jettison him and his corrupt regime. All the more reason why every conceivable act that undermines Assad’s internal legitimacy and standing is urgently needed in order to avert a larger bloodbath and potential civil war.

Perhaps Syrians may be asking for the impossible from the West, but they deserve what is realistically possible and that is considerably more than what they are getting now.