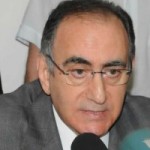 Economy Minister Nicolas Nahhas defended on Thursday the cabinet’s decision over the increase in the labor minimum wage calling it “scientific.”

“ The decision was scientific, and more than a result of workers’ demands,” Nahhas told Free Lebanon radio.

“It is important that this increase will not lead to inflation or other negative impacts,” Nahhas added.

The economy minister also denied that the cabinet’s decision was taken under pressure,.

March 14 MP Riad Rahhal said on Wednesday that the cabinet “only works under pressure.”

The Lebanese cabinet met at Baabda Presidential Palace on Wednesday evening and approved the wage increases that were agreed on Tuesday night between Prime Minister Najib Mikati and the General Workers Union.