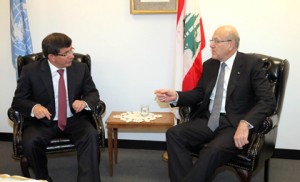 The report added that the Turkish FM stressed on the necessity of amending the treaty with Cyprus and drafting a new one with Turkey on the maritime border and economic zone. maritime border.

The daily reported that Davutoglu also said that his country “rejects any dialogue with the Syrian regime.”

Syrian President Bashar al-Assad will be ousted “sooner or later” by his own people as the time of dictatorial rule fades around the world, Turkish Prime Minister Tayyip Erdogan said on September 25 during an interview with CNN