by yalibnan
2255
Once-peaceful Syrian protesters are increasingly taking up arms to fight a six-month military crackdown, frustrated that President Bashar Assad remains in control while more than 2,700 demonstrators are dead
Share: 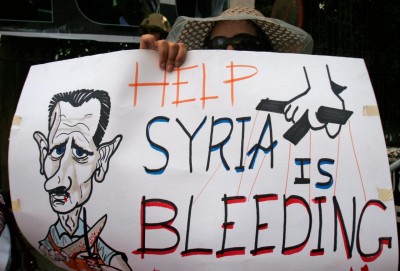 By ELIZABETH A. KENNEDY, Associated Press

Once-peaceful Syrian protesters are increasingly taking up arms to fight a six-month military crackdown, frustrated that President Bashar Assad remains in control while more than 2,700 demonstrators are dead, analysts and witnesses say.

The growing signs of armed resistance may accelerate the cycle of violence gripping the country by giving the government a pretext to use even greater firepower against its opponents. Authorities have already used tanks, snipers and mafia-like gunmen known as “shabiha” who operate as hired guns for the regime.

“If peaceful activism on the part of the protesters turns into violent insurgency, the risk of civil war will dramatically increase and the regime will benefit and likely go for the kill,” Bilal Saab, a Middle East expert at the Monterey Institute of International Studies in California, told The Associated Press.

The degree to which Syrian protesters are arming themselves is difficult to quantify because Syria has blocked nearly all outside witnesses to the bloodshed by banning foreign media and restricting local coverage. The state media echoes the party line, which states the regime is fighting thugs and religious extremists who are acting out a foreign conspiracy.

But interviews with a wide group of witnesses, activists and analysts suggest the conflict is becoming more violent. Led by defecting army conscripts and Syrians with access to weapons smuggled in through neighboring Iraq, Turkey and Lebanon, protesters have begun taking up arms to fight back, observers say.

They are being aided by Sunni fighters returning from Iraq to their native Syria.

“Now these Syrian insurgents are returning to their country to help topple the Assad regime,” said Qassim al-Araji, a Shiite member of the Iraqi parliament’s defense and security committee. “We are happy to see these fighters leaving Iraq, saving us from their evils, but at the same time we do not want major disturbances in neighboring Syria.”

A widespread armed revolt would be a potentially dire change in the protest movement, which for strategic reasons has remained mostly peaceful with an eye toward gaining a moral advantage over Assad. In many ways, the movement was modeled after the nonviolent revolutions in Tunisia and Egypt.

But with the U.N. estimating more than 2,700 civilian deaths since the uprising began in mid-March, many protesters are starting to see the limits of a peaceful movement, particularly when compared to the armed uprising in Libya that drove Moammar Gadhafi from power — albeit with NATO air support.

Although the mass demonstrations in Syria have shaken one of the most authoritarian regimes in the Middle East, the opposition has made no major gains in recent months, it holds no territory and still has no clear leadership.

“The regime is killing the people and some residents are thinking that peaceful demonstrations will take them nowhere, even in 10 years from now,” said a prominent Syrian activist who asked that his name and location not be published because of the sensitivity of the issue. “Gunmen and army defectors are fighting side by side against regime forces.”

He and other activists said the armed resistance is strongest on the outskirts of Homs, a central city that has seen some of the largest demonstrations, along with Jabal al-Zawiya in Idlib province near the Turkish border.

There also have been increasing reports of attacks on security forces and police patrols. Mohammed Saleh, an opposition figure in Homs, said he saw a police car riddled with bullets and a burned-out security bus in the city last week.

“The opposition to the government is gradually transforming into more of an armed resistance,” said Vali Nasr, a Middle East expert and former Obama administration official in the State Department. “The brutality of the regime has become enormous and there is increasing pressure on people to defend their families and their villages. They clearly have won a moral argument against the government, but physically it doesn’t protect them.”

There is no central call to arms by the opposition, in part because there is no clear leadership in the movement. The Syrian opposition is disparate and fragmented, with various parties vying for power as they see an end to more than 40 years of iron rule by Assad and his late father, Hafez.

Still, recent weeks have seen a subtle change in tone. Some Syrians are now calling on protesters to take up arms and inviting foreign military action, hoisting signs that say “Where is NATO?” and urging the world to come to Syria’s aid.

The most prominent protest organizers responded swiftly, insisting the movement is entirely peaceful and stressing that the Assad regime will use any violence to justify its ferocious crackdown.

“While we understand the motivation to take up arms or call for military intervention, we specifically reject this position,” said a statement last month by the Local Coordination Committees, an activist group with a wide network of sources on the ground across Syria.

“Militarization would … erode the moral superiority that has characterized the revolution since its beginning,” the statement said.

Many activists were hesitant to speak on the record about the armed resistance; others denied it outright. Mohammed Saleh, one of the activists in Homs, blamed the increased violence on drug dealers and smugglers.

But the calls to arms appear to be borne of frustration that the revolt has descended into a stalemate, with neither side willing to give in. The protests have continued nearly every day, but the gatherings have lost some momentum in recent weeks.

“The great majority of the opposition members have shown extraordinary restraint in the face of the regime’s brutality and are demanding their rights through peaceful, unarmed demonstrations,” Toner said Monday. “The longer the regime continues to use repression, killing and jailing peaceful marchers and activists both, the more likely that the peaceful protest movement will become more violent.”

The U.N. human rights office says the regime has started retaliating against protesters’ families to snuff out the uprising, a fearsome new tactic which could be having a chilling effect on the revolution.

“Prominent human rights defenders, inside and outside the country, are reported to have been targeted,” U.N. human rights office spokeswoman Ravina Shamdasani said in Geneva on Friday. “We are also concerned by reports of the targeting and attacking of families and sympathizers of the protesters by security forces.”

There is little sign of the violence ending anytime soon. International intervention, like the NATO action that helped topple Gadhafi, is all but out of the question. Washington and its allies have shown little appetite for intervening in yet another Arab nation in turmoil.

International sanctions, some of which target Assad personally, have failed to persuade him to ease his crackdown. There had been hopes, since dashed, that European Union sanctions would prove a humiliating personal blow to Assad, a 46-year-old eye doctor who trained in Britain.

There also is real concern that Assad’s ouster would spread chaos around the region.

Syria is a geographical and political keystone in the heart of the Middle East, bordering five countries with which it shares religious and ethnic minorities and, in Israel’s case, a fragile truce. Its web of allegiances extends to Lebanon’s powerful Hezbollah movement and Iran’s Shiite theocracy.

A destabilized Syria, the argument goes, could send unsettling ripples through the region.

Syria also has a volatile sectarian divide, making civil unrest one of the most dire scenarios. The Assad regime is dominated by the Alawite minority, an offshoot of Shiite Islam, but the country is overwhelmingly Sunni Muslim.

Alawite dominance has bred resentments, which Assad has worked to tamp down by pushing a strictly secular identity. But he now appears to be relying heavily on his Alawite power base, beginning with highly placed relatives, to crush the resistance.

For many Syrians, the uncertainty over the future is cause for alarm in a country where sectarian warfare is a real, terrifying possibility. Syria is a fragile jigsaw puzzle of Middle Eastern backgrounds including Sunnis, Shiites, Alawites, Christians, Kurds, Druse, Circassians, Armenians and more.

Even for Syrians who despise Assad, the worst-case scenario is a descent into a Lebanese-style civil war — and Assad has exploited those fears by portraying himself as the only power who can keep the peace. But as faith in the regime erodes, Syrians could decide that protecting themselves will be their only option, regardless of the outcome of the uprising.

“The argument for arming yourself is very strong, whether you think Assad is going to survive or fall,” Nasr said. “People are becoming increasingly unconvinced a peaceful transition is in the cards. So either the regime will survive with enormous brutality or it will fall to chaos and violence. Either way, people are taking to arms.”