Editorial: A Palestinian state is a moral right

by yalibnan
2308
The case for a Palestinian state is unanswerable and must be supported in the west
Share: 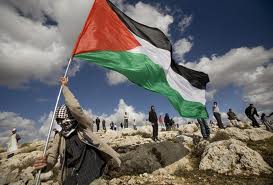 For the Zionist movement seeking an independent state of Israel, desire became reality in November 1947, when the General Assembly of the United Nations passed Resolution 181 supporting the establishment of a Jewish state in a partitioned Palestine.

That state was declared on 14 May 1948 by David Ben-Gurion and the Jewish people’s council in a Tel Aviv museum. The state of Israel was recognised that evening by President Truman of United States and by the Soviet Union a few days later.

More than six decades later, Palestinians, who at first refused to accept the partition plan of the newly minted UN, are seeking similar recognition, firstly in front of the Security Council, asking for their own state based on the 1967 borders free from occupation and settlement by half-a-million Israelis, able to determine their own affairs.

The idea of a Palestinian state should be uncontroversial. The United States supports the notion, as does the UK. Indeed, in his 2009 Cairo speech, President Barack Obama insisted: “Israelis must acknowledge that just as Israel’s right to exist cannot be denied, neither can Palestine’s.”

Yet Obama appears determined to veto the move towards Palestinian statehood, while Britain has hinted it is likely to abstain in a Security Council vote.

Should the Palestinian request fail at the Security Council, it will then go to the General Assembly, where it seems likely that close to 130 states will vote to support a Palestinian resolution which will be able only to grant an enhanced status to become the equivalent of the Vatican – an “observer state”. It will, however, be a deeply symbolic moment providing a political, moral and diplomatic victory for the Palestinian cause that the world will find difficult to ignore.

It will, significantly, also allow Palestine to become a signatory to the International Criminal Court, permitting it to pursue claims against Israel.

While it seems certain that European countries such as France and Spain will support recognition, what is less clear is how the UK will vote in the General Assembly, amid increasing speculation that it might support an enhanced Palestinian status of “observer state” with the right to complain to the International Criminal Court, but only if cases cannot be raised retrospectively.

The objections to a Palestinian state – driven by Israel with the support of the US – are dangerous and transparently self-serving ones, not least in the midst of an Arab Spring where the US and Europe have tried to present themselves as being supporters of democracy, freedom and justice.

The only valid mechanism for the creation of a Palestinian state, this argument goes, is the ongoing peace process, but in fact it is a moribund peace process, which Israel has done its best to smother under the obstructionist leadership of Binyamin Netanyahu.

Equally contentious is the claim by some supporters of Israel that in seeking their own state through the declaration of the international community rather than direct talks, Palestinians are seeking to “delegitimise” Israel.

The reality is that what those opposing the moves at the UN are demanding is that Palestinians adhere to a non-existent peace process in the good faith that at some time it might be revived in the future under American guidance.

They also require Palestinians to refrain from moves that would expose the double standards of the White House and Congress which, while supporting a two-state solution in words, has not only failed to deliver one but now threatens actively to block that outcome.

Palestinians, this newspaper believes, are right to be wary of the vague promise that things might be better in a revived peace process at some unspecified time in the future. Despite Oslo and 20 years of peace negotiations, as comparison of maps makes only too clear, the space available for a Palestinian state has only shrunk with each passing decade as Israel has continued to appropriate more land in the West Bank and East Jerusalem.

The actions of the Israeli army in the occupied territories, as the recent book of a decade’s worth of soldiers’ testimonies by the servicemen’s group Breaking the Silence has recently demonstrated, have not changed in the desire to control and disrupt ordinary Palestinian life on a daily basis.

The truth is that the occupation has become self-sustaining, both for the Israeli army which is implementing the policy, and for a partly militarised society and its politicians, who cannot persuade themselves to bring the occupation to an end.

There are risks, inevitably, in taking the issue of statehood to the UN, even in the end if it is only for the upgrading of its observer status. Moves on statehood threaten the long-fractious relationship between Fatah and Hamas, the latter of which opposes the statehood moves, particularly in its stronghold, Gaza, raising the risk of more political violence between the rival factions.

There is the danger, too, that the tactic will feel like a damp squib on the day after when Palestinians wake up to see nothing in their lives has changed.

But already the strategy has shed important light on a Middle East peace process in which a United States that has long cast itself as an impartial broker (while vetoing every crticism of Israel raised at the UN) is a far from neutral referee, even as its influence in the region has appeared diminished.

That new reality was dramatised last week with the explicit threat by Saudi Arabia that its important relationship with the US will be downgraded should America choose to use its veto. As in November 1947, we stand at a crossroads of history.

As British ministers deliberate how they will vote in the Security Council, they are confronted with the choice between what is morally right – supporting a Palestinian state – and hypocrisy justified in the name of pragmatism.

The state of Israel was founded amid risk and uncertainty, which those who supported it fully recognised. They did not argue that a Jewish homeland was possible only in the most ideal and secure conditions. That argument should not be used to further delay Palestinian statehood.