by yalibnan
2445
Syrian President Bashar al-Assad looks doomed, politically if not militarily, and the longer he clings to power by brute force the harder it will be to achieve an orderly transition and mend a ruined economy.
Share: 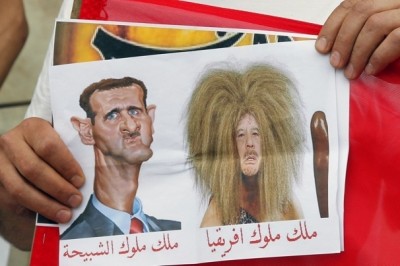 Syrian President Bashar al-Assad looks doomed, politically if not militarily, and the longer he clings to power by brute force the harder it will be to achieve an orderly transition and mend a ruined economy.

The 45-year-old leader has shown no sign he is willing to relinquish office. A military coup or a contest within elements of the army, security forces and the Baathist party elite could break the stalemate. Otherwise more bloodshed seems inevitable.

But opposition figures like Haitham Maleh, 80, voice confidence that a post-Assad Syria can move to democracy and avoid the chaos Iraq endured after the 2003 U.S.-led invasion.

“We do not have any fear of the people being ready to take over,” Maleh, a veteran human rights lawyer, told Reuters.

“Syria is different from Iraq. Iraq was destroyed. In Syria there is a popular democratic revolt and people are meeting, forming activists groups and committees and preparing.”

For the past five months hundreds of thousands of Syrians have braved arrest, torture, bullets and even tank fire to demand his downfall. They have been unable to topple him.

Assad’s military and security apparatus, dominated by his minority Alawite sect, has equally failed to suppress a popular uprising inspired by revolts sweeping much of the Arab world.

Damascus has blamed the insurrection on foreign-backed armed gangs and has played on the fears of some Alawites, Christians and secular-minded people among Syria’s Sunni Muslim majority that Islamists might seize power if Assad’s power crumbled — although protesters have rarely raised Islamist slogans.

This week the United States and its European allies have joined demands for Assad to quit, ditching their previous calls for drastic reforms — an implausible project that would have forced him to dismantle a security-based police state and dislodge his own clan from the center of power and wealth.

Even Turkey, once an ally, and Saudi Arabia, bastion of Sunni Islam, have turned against Assad, without demanding his removal. Russia, with a naval base on Syria’s Mediterranean coast, says he should have more time to enact reforms.

Deepening international isolation might persuade some of the many Syrians who have sat on the fence during the turmoil that Assad’s days in the presidential palace are numbered.

“It makes a difference for these people, not least some of the Alawite leaders, who have this conspiratorial mindset and think that if the Americans have made up their minds Assad must go, then he will go sooner or later, so it’s better for them to leave the ship before it sinks,” said Volker Perthes, director of the German Institute for International and Security Affairs.

Syria’s opposition ranges from the Muslim Brotherhood to secular liberals, nationalists and Kurds as well as the mostly unknown local leaders and youthful activists who have driven the anti-Assad protests in towns and cities across the country.

They might applaud if, as in Egypt and Tunisia, army generals dismayed at having to turn their guns on their people, rather than outside enemies, told Assad it was time to go.

Some had hoped that former Defense Minister Ali Habib, an Alawite, would play that role. Assad removed him this month.

Whether he is deposed by the army or otherwise, the people waging a revolt which has cost up to 2,000 civilian lives and, the authorities say, those of 500 soldiers and police, will want a transition to civilian rule and a say in Syria’s future.

In June, around 300 opposition figures, including some from the outlawed Muslim Brotherhood, gathered in Turkey to promote democratic change in Syria and elect a consultative council.

While acknowledging their differences, they agreed to work together, rejected foreign interference and stressed that the peaceful revolt did not target any sect — an attempt to reassure Alawites fearful of persecution in a post-Assad era.

Syrian dissidents have suffered decades of repression in a country where power resides in the Assad family, exercised through the Baath party, the security agencies and a favored business elite. They had seemed ineffectual, if not irrelevant.

Yet some, such as Maleh, former member of parliament Riad Seif and others, retain widespread respect in Syria and could perhaps play a leadership role in a transitional phase.

The revolt itself has spawned new young leaders and activists, who have clandestinely organized protests, coordinated among themselves and used satellite telephones and the Internet to send images of their struggle around the world.

“It’s remarkable what they have achieved in maintaining momentum against a regime which is prepared to use full force in an environment which was always much more repressive from the beginning than Egypt under (Hosni) Mubarak,” said Perthes.

He said the experience developed by those organizers and their silent supporters among the business class who have provided money and care for the families of victims would help prevent Syria from descending into anarchy once Assad goes.

Syria’s institutions may be inefficient and often tainted by corruption, but many of the bureaucrats have no love for their political masters, without daring to defy them.

“Diplomats in Syrian embassies abroad, good technocrat ministers — send them a signal, leave that government and you could be useful in the future,” Perthes said, adding that Syria was not a failed state such as postwar Iraq had been.

Assad’s own early reforms may have unwittingly encouraged the youngsters now crying out for his downfall.

When the president took over from his formidable father Hafez al-Assad in 2000, he flirted briefly with more political openness and persisted longer with mild attempts to modernize and liberalize an economy long mired in Soviet-style socialism.

He also eliminated military uniforms from schools in what David Lesch, a Middle East expert at Trinity University in San Antonio, Texas, describes as an attempt to shift from military indoctrination to a more normal educational environment.

“Ironically, this may have contributed to a new generation of youth thinking not of a battle against real and imagined foes, but of securing a socio-political milieu more conducive to a better life,” he wrote in Foreign Policy magazine.

Any future government will face a daunting task in reviving an economy that was in poor shape even before the unrest, which has thrown growth into reverse, choked investment, devastated the vital tourism sector and widened fiscal deficits.

“Even if Assad wins militarily he will lose politically because he will be isolated,” Perthes said, adding that this would only worsen economic problems and give impoverished, jobless people even more reasons to take to the streets.

For Beirut-based commentator Rami Khouri, Assad’s only options are to choose the manner of his exit — one that is the outcome of sweeping top-down reform, one negotiated with the opposition or a fight to the death with his own people.

“If he really does stop military operations, the subsequent rising tide of demonstrators will drive him from office.

“And if he continues applying force against his own citizens, the combination of the persistent citizen revolt and the rising regional and international pressures against him will also drive him from office,” Khouri wrote.