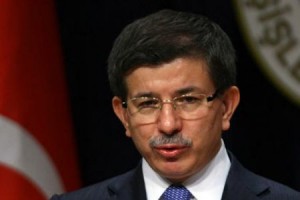 BEIRUT, Lebanon — Turkey’s foreign minister demanded Monday that the Syrian government end its crackdown on a five-month-old uprising “immediately and unconditionally,” warning that unspecified steps would be taken otherwise.

The comments by the minister, Ahmet Davutoglu, who visited the Syrian capital, Damascus, just last week, were the latest addition to a semantic exercise in diplomatic ambiguity, as the United States, European countries, Turkey and Syria’s Arab neighbors have sought to condemn the violence while leaving President Bashar al-Assad the chance to begin reform.

So far, the Syrian government has ignored the condemnations. Just days after the visit by Mr. Davutoglu, who by his own count has visited Syria more than 60 times, the government sent its military and security forces into the port of Latakia, the third city to fall target to a withering crackdown that activists say has killed 260 people this month.

Since the beginning of August, government forces have retaken control of Hama, in central Syria, and Deir al-Zour, in the east, both of which witnessed demonstrations numbering in the hundreds of thousands earlier this summer.

The same tactic was used in Latakia over the weekend, activists said, as well as gunfire that originated from ships off the coast. The Syrian government has denied that ships fired at Latakia.

Activists say 31 people have been killed since the beginning of the Latakia assault.

“This is our final word to the Syrian authorities: Our first expectation is that these operations stop immediately and unconditionally,” Mr. Davutoglu said at a news conference in Ankara, the Turkish capital. “If the operations do not end, there would be nothing more to discuss about steps that would be taken,” he said, without saying what that action might include.

Diplomats have said that they believe that Turkey, during Mr. Davutoglu’s visit with Mr. Assad, gave the Syrian government two weeks to introduce sweeping changes in a country that remains the region’s most authoritarian. The precise nature of those changes remains unclear, but the window came amid a flurry of conversations between President Obama, Prime Minister Recep Tayyip Erdogan of Turkey and King Abdullah of Saudi Arabia.

No less apparent are the Syrian government’s intentions. It has continued to insist that it is facing a rebellion by armed Islamists financed from abroad. It described the violence in Latakia, where the crackdown began on Saturday, as an issue of security forces pursuing men armed with “machine guns, grenades and explosive devices.”

“It’s a big game,” a diplomat in Damascus who spoke on condition of anonymity said of Syrian officials. “But I don’t know what game they are playing, to be honest.”

Some analysts have criticized Mr. Davutoglu’s visit to Syria, arguing that it only bolstered the credibility of the Syrian government at the very time that the United States, European countries and others were trying to isolate Mr. Assad’s leadership. The escalation in violence seems to have embarrassed Turkish officials, who had only last week urged at least a measure of patience in seeing whether Mr. Assad would act.

“At a time when the regime is stepping up the repression, quite significantly, I think this is not the time to talk or offer to engage or go all the way to Damascus to repeat a message which by this time has been repeated enough,” said Peter Harling, an analyst on Syria with the International Crisis Group. “Sending Davutoglu at this time was the worst possible thing they could do. It gives the regime legitimacy and cover.”

The Syrian military and security forces pressed on with raids in Latakia on Monday, especially on a southern neighborhood inhabited by Palestinian refugees and poor Syrians, but the violence appeared less pronounced than over the weekend.

Ahmed Bogdash, an activist in Latakia, said by phone that snipers were perched on rooftops and that gunfire rattled across some neighborhoods, whose streets were largely empty.

He said protests were organized in some places the military had yet to enter, in solidarity with neighborhoods besieged since Saturday. Families continued to flee to towns in the countryside or to Aleppo, Syria’s second-largest city.

“There’s still gunfire, but it’s quieter than before,” he said.