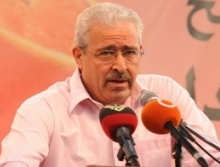 “The previous cabinet was one of fraud,” he told Hezbollah’s Al-Manar television.

Awar, who is a Hezbollah member was allocated to the so called ‘Mountain Unity parliamentary bloc ‘ which is headed by MP Talal Arslan in order to allow him ( Arslan) to be part of the national dialogue talks. Only heads of blocs could participate in the dialogue talks.

“What did they do regarding issues of water, energy and road traffic? All what they did was persue the Special Tribunal for Lebanon (STL), which has legal and constitutional gaps,” Awar added.

He called on the new cabinet to stop funding the STL, adding that the international tribunal is a US-Israeli court and the government should tackle the issue of witnesses who gave unreliable testimonies to the STL.

Awar’s statements contradict with those of PM Nagib Mikati

In his first foreign interview since announcing a new cabinet, Lebanon’s Prime Minister told CNN on Monday ” We are going to proceed in this tribunal. It is not in our hand to eliminate the tribunal by any means”

Asked about funding it he said :

“It is one of the issues of the protocol and we are going to follow this protocol as is.”