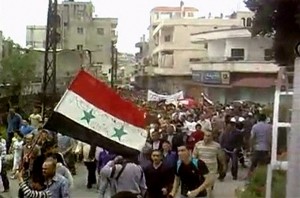 Syrian troops and armed groups described by one resident as “death squads” have laid siege to the city of Homs since Monday night, sources said.

Syrian rights activist Rami Abdulrahman, director of the London-based Syrian Observatory for Human Rights, said that the city had been the scene of intense battles since security forces stepped up a crackdown on Monday night.

Homs has been a focal point of the uprising against President Bashar al-Assad since the military stormed its districts two months ago to crush anti-government protests.

“Thirteen civilians were killed yesterday and today in several parts of Homs when the army opened fire as it carried out an operation in the city,” he said.

Abdulrahman said the fighting in Homs erupted after three regime supporters kidnapped last week were killed and their dismembered bodies were returned to their relatives.

“These clashes are a dangerous development that undermines the revolution and serves the interests of its enemies who want it to turn into a civil war,” he said.

Al Jazeera cannot independently verify events in Syria because of restrictions on reporting.

Updating the Reuters news agency by phone on Tuesday, a Homs resident said, “There are troops and armoured vehicles in every neighbourhood. The irregular forces with them are death squads.

“They have been firing indiscriminately since dawn with rifles and machine guns. No one can leave their homes.”

The Syrian Observatory for Human Rights said 30 people were killed in Homs in factional fighting over the weekend, with bodies of members of the minority Alawite sect, the same as Assad, found mutilated.

But other estimates offered far lower estimates, with the Syrian National Human Rights Organisation suggesting that only seven people were killed over the weekend.

Diplomatic pressure is mounting on Assad after Qatar, previously a major supporter, shut its embassy in Damascus and the European Union said it was considering tougher sanctions.

“The situation remains very serious and if anything is deteriorating. Certainly there will be a time for further sanctions and we need to be discussing now what those would be.”

The EU has already imposed travel bans and asset freezes on 34 Syrian individuals and entities, but Hague said after a meeting of EU foreign ministers in Brussels “work now needs to start so we can add to that if necessary over the coming days and weeks.”

A statement agreed by the ministers in Brussels said: “Until the unacceptable violence against the civilian population is halted… the EU will pursue and carry forward its current policy, including through sanctions,” it said.