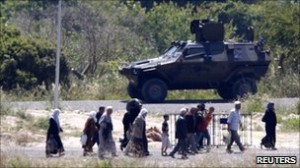 An emergency meeting was held at the Turkish headquarters of the Foreign Affairs Ministry in Ankara to discuss the latest developments on the Syrian-Turkish borders particularly after Syrian soldiers came approximately 500 meters close to Turkish borders, BBC Arabic reported on Friday.

The meeting was headed by Turkish Minister of Foreign Affairs Ahmet Davutoglu and attended by military figures, the report also said, adding that the participants discussed the possible scenarios that might occur if Syrian soldiers tried to forcefully prevent Syrian refugees from crossing into Turkish territories.

An unnamed Turkish official told BBC that he hopes tension does not occur between Syria and Turkey.

The Turkish Ministry of Foreign Affairs on Thursday evening summoned Syrian Ambassador to Turkey Nidal Kabalan and informed him about Turkey’s “dissatisfaction,” the report also said, adding that the reasons behind Turkey’s discontent were not made clear.

The Syrian government is engaged in a deadly crackdown on protesters who since March have been demanding the end of 48 years of rule by the Baath Party, which is controlled by Syrian President Bashar al-Assad. Now Lebanon