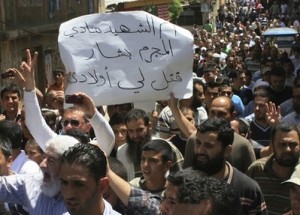 Syria suffered through another agonizing day of bloodshed Friday as security forces fired on antigovernment protesters after weekly prayers in several cities across the country.

Human rights activists said at least 24 unarmed people were killed in the violence.

Amateur video showed security forces in military vehicles shooting at children in the southern town of Dail, where activists say a 13-year-old boy was killed and a 16-year-old was critically wounded.

Another clip showed panicking protesters dashing for cover as gunfire erupted in the streets of Homs. Weeping men could be seen carrying the limp body of a man who had apparently been shot in the face.

Syria’s three-month uprising has become the greatest challenge ever to the longtime authoritarian rule of President Bashar Assad and his family. The regime has responded with a brutal military crackdown laden with sectarian overtones.

The developments have sent shock waves across the region and beyond.

In Washington, a senior Obama administration official said the size and persistence of the protests showed that “the fear factor is no longer enough to keep people at home.” Some Syrian opposition members are meeting daily with U.S. Ambassador Robert S. Ford and other embassy officials in Damascus, despite the risk, according to U.S. officials.

The officials said the administration and its allies were weighing measures to pressure Assad, including imposing additional sanctions on Syria’s oil and gas sector. Also under consideration is a recommendation that the International Criminal Court consider charges against members of the Assad regime for the violence against protesters.

Assad’s regime is dominated by Alawites, a small Shiite Muslim offshoot that is estimated to make up 10% of Syria’s population. The majority of Syrians are Sunni Muslims.

Late Thursday, Assad’s unpopular and powerful cousin, telecommunications tycoon Rami Makhlouf, said he was withdrawing from business and would devote his profits to charity, a claim that could not be verified.

“I will not allow for myself to be a burden on Syria, its people or president. I will put into circulation part of the shares that I possess of Syriatel Mobile Telecom for Syrian citizens with limited income,” he said in a televised appearance.

Makhlouf is already blacklisted by the European Union as one of 13 regime figures behind the violence that, according to rights activists, has killed 1,300 people in three months.

Protesters and activists did not appear to be deterred by the increasingly violent crackdown nor impressed by Makhlouf’s assertion. On social networking websites, they mocked him as “Mother Rami Teresa” and took to the streets to voice their complaints. One activist in the Syrian city of Latakia, who declined to be identified, said the shares were never his to begin with.

“He was made of corruption, and his companies were not made of clean money,” said another Syrian activist, Hozan Ibrahim, who lives in Europe. “That statement was a dirty game by the regime and did nothing and was done in vain. People didn’t believe it.”

Video posted on the Internet showed peaceful protesters at campuses in the capital, Damascus, and its suburbs, as well as in Aleppo, the country’s second-largest city. Other video showed large protests in Homs, the third-largest city; the central city of Hama; and the Kurdish cities of Qamishli and Amouda.

An activist reached by telephone in Homs said thousands had taken to the streets in several neighborhoods.

“The demonstrators from various protests in the city tried to join together, but security forces fired tear gas into the crowds to disperse the protests,” said the activist, who spoke on condition of anonymity. They also chanted in support of Turkish Prime Minister Recep Tayyip Erdogan, whose government this week dramatically chilled once-warm ties with Syria over human rights abuses.

“Erdogan, you are the hope for Syrians,” they chanted, according to the activist.

Another video clip uploaded to the Internet showed activists in Latakia ready to set fire to the flags of Iran, Russia and the militant group Hezbollah, all friends of Assad’s regime.

“The people want the overthrow of the regime,” they chanted.

Protests were also reported in the northwestern city of Idlib, the scene in recent weeks of a massive security crackdown; the besieged cities of the Dara region in the south; the coastal city of Baniyas; and Dair Alzour, on the Euphrates River, near the Iraqi border, where troops are massing for what may be a major security operation.

Activists, using themes each Friday to highlight different aspects of the protest movement, dedicated this week’s effort to Sheik Salih ibn Ali, an Alawite leader who fought for Syria’s independence from France in the 1920s. Assad, also an Alawite, has been sharpening sectarian divisions in Syria and the region by deploying troops led by his co-religionists against the Sunni majority.

The unrest, and the regime’s continuing use of military force to quell peaceful protests, has sent thousands of Syrians into neighboring countries, especially Turkey, which has set up tent camps to house an exodus that has reached 10,000 so far.

Actress Angelina Jolie, a goodwill ambassador for the Office of the U.N. High Commissioner for Refugees, arrived by private plane Friday in southeastern Turkey to visit refugees in an effort to bring attention to their plight.

Photo: Anti-Syrian president Bashar Assad protesters, shout slogans as they march during a demonstration against the Syrian regime, in the northern city of Tripoli, Lebanon, on Friday . The Arabic placard read:The mother of the martyr calls out the criminal Bashar killed my children”. (AP Photo)