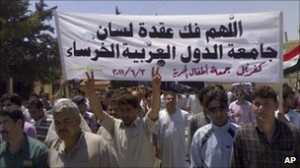 Witnesses say security forces used live ammunition to try to disperse tens of thousands of protesters in Hama who took to the streets after Friday prayers.

Rights groups said 300 people were wounded and hospitals were unable to cope with the large number of patients.

Hama is where 29 years ago, President Hafez al-Assad, the current president’s father, led a brutal crackdown that left at least 10,000 dead.

Demonstrations also occurred in Damascus and other cities Friday, following a call by opposition groups to denounce a growing number of casualties among children in recent weeks of the uprising against Mr. Assad.

Despite official denials, protest organizers say at least 25 children have died. The victims include a 13-year-old boy who reportedly was tortured and killed by security forces – an accusation Syrian authorities dispute.

Unofficial reports say all Internet service stopped in Damascus and several other cities on Friday.

The latest unrest follows a two day meeting in Turkey of Syrian opposition figures, who called for President Assad’s immediate resignation. Opposition figures say they are committed to do whatever is necessary to “bring down” the Assad government and begin planning for new, democratic elections.

In New York Friday, a spokeswoman for U.N. chief Ban Ki-moon says he called for an immediate end to “violent repression” by Syrian forces and for dialogue that leads to comprehensive reforms in the country.