A Syrian-American governor thinks he could beat Obama 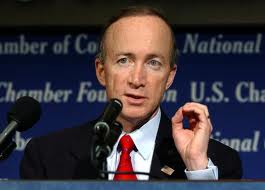 The Republican governor said Tuesday his chances of beating Obama would be “quite good,” but that’s not factoring into his deliberations on a White House run. He spoke to reporters after giving public service awards to state employees.

Daniels’ comments came a week after he said he wasn’t ready to debate Obama on foreign policy.

Daniels has said he’ll decide soon whether to seek the GOP nomination.

Mitchell Elias “Mitch” Daniels, Jr., (born April 7, 1949 to Dorothy Mae (née Wilkes) and Mitchell Elias Daniels, Sr , is the 49th and current Governor of the U.S. state of Indiana. A Republican, he began his first four-year term as Indiana’s 49th Governor on January 10, 2005, and was elected to his second term by an 18-point margin on November 4, 2008. Previously, he was the Director of the U.S. Office of Management and Budget under George W. Bush. He was formerly President of Eli Lilly and Company’s North American operations, Indiana’s largest corporation. He is cited as a rising star in the Republican Party.

During his first year in office, he proposed a number of controversial plans to balance the state budget through tax increases, budget cuts, and privatization plans. Because of the opposition led by Republican Speaker of the House Brian Bosma, only two of the new taxes were approved. Support for a switch to daylight saving time, the privatization of the Indiana Toll Road, and the closure of many license branches brought him into conflict with Democrats; and, in 2005, his approval ratings dropped to 42%. In 2007, he began pressing for constitutional changes to cap State property taxes at 1-3% of value. The caps were approved by the Indiana General Assembly as statute, and made a ballot measure in 2008. His support for the property tax limits, and its subsequent adoption, helped raise his popularity and secure his re-election bid.

Daniels was recently honored by the Arab-American Institute (AAI) with the 2011 Najeeb Halaby Award for Public Service.