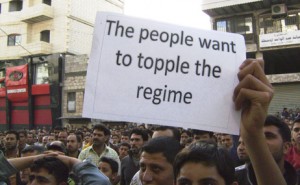 Both Al Jazeera and the Guardian are liveblogging Syria’s Day of Defiance, as civilians gather in dozens of small towns and cities to demand the repressive government of Bashar al-Assad give up power. Al Jazeera says protesters in Tafas, a town south of Deraa held up placards near the main mosque with a single word: Leave.

Reports indicate thousands – possibly tens of thousands – of people have turned out and have been met by security troopers and snipers. AP says Syrian security officials fired on protesters in the city of Homs, killing at least five, while a sixth person was killed in Hama. NPR’s Kelly McEvers tells NPR Newscasts despite the repression, the protesters’ momentum is growing:

The UN says Syrian authorities have decided to allow a mission to visit Daraa ‘in the coming days’, according to the Telegraph.

The twitterverse is blazing with updates, such as this from Malath Aumran, whose page is subtitled Tweeting the Police State in the Revolt Time:

Syrian opposition leader Riad Seif was arrested in Damascus today as he attended a pro-democracy rally, according to Reuters, which interviewed his daughter, Jumana. ‘My father was shoved into a bus with other protesters who were detained during the demonstration near the al-Hassan mosque’. NPR