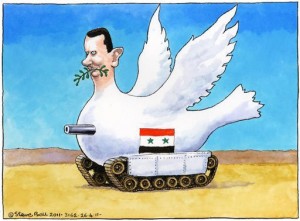 Syria has called on citizens “misled” into acting unlawfully to turn themselves in, in return for exemption from prosecution, as security forces continue to crack down on protests against Bashar al-Assad’s regime.

Dozens more people have been killed in recent days, according to activists, and hundreds arrested as Syrian army units continue to lay siege to the restive southern city of Deraa and other flashpoint cities across the country.

A humanitarian aid convoy bound for Deraa from Syria’s Jordanian border was due to depart on Monday afternoon in a bid to reach the city of 125,000 which has been without electricity and communications since April 26. Activists claim food, water and medical supplies are in short supply.

Anti-government protesters, inspired by a wave of unrest across the Arab world, are demanding greater freedoms and an end to Assad’s decade-long presidency and the Baath Party’s near-50-year grip on power.

Opposition activists have called on Syrians to protest every day at noon in solidarity with Deraa and all “besieged” towns.

But Syria’s government accuses “armed groups and terrorists” of attempting to foment unrest. In a statement on Sunday evening, the interior ministry offered an amnesty until May 15 for citizens caught up in the revolt to hand themselves in.

“The Ministry calls upon citizens who were misled into participating in or committing acts punishable by law including carrying weapons, disrupting security or issuing false statements to turn themselves in and hand over their weapons to the relevant authorities,” the ministry said, according to the SANA state-news agency.

The ministry also appealed for information about “vandals and terrorists and the location of weapons” and said those who complied would be “exempted from punishment, legal repercussions and prosecutions.”

But government security forces were again making their presence felt on the streets overnight, with a military source on Monday announcing the arrests of 499 people in Deraa. Ten “terrorists” and two security force members died in Sunday’s clashes, the source told SANA.

An activist told Al Jazeera on Sunday that the army was going door-to-door, raiding homes and arresting men and boys aged 15 and over.

Tanks backed by other armoured vehicles cruised the streets, but the city was said to be quieter than in recent days with no gunfire or tank fire heard.

But there were reports of gunfire in Homs on Sunday evening after security forces surrounded around 600 protesters gathered outside the central Khalidiyyeh Mosque, calling for an end to Assad’s rule.

Syrian forces also arrested a prominent human rights lawyer in the city of Raqqa after he criticized the authorities’ reaction to the anti-government protests, the Syrian Observatory for Human Rights said.

The Observatory said Abdallah Khalil was arrested on Sunday in his home city of Raqqa in eastern Syria.

Khalil challenged president Assad in 2007 for running unopposed in a referendum that gave him a second term as president. He made the comments on Al Jazeera.

In Damascus, the capital, an eyewitness told Al Jazeera that tanks had surrounded the suburb of Daraya. Activists said security forces had also moved into Kafar Nubbol, 320 kms north of Damascus, at dawn on Monday, arresting 26 people in the capital and in the eastern city of Qamishli.

Neighbouring Turkey said on Monday that it was preparing for a possible influx of Syrian refugees into its southeastern Hatay province. Abdullah Gul, the Turkish president, told a news conference that Ankara was preparing for the “worst-case scenario”.

Alain Juppe, the French foreign minister, meanwhile added his voice to the growing clamour of international condemnation of Damascus.

“If the regime perseveres down this path, it will fall, one day or another, but it will fall,” Juppe told Europe 1 radio on Monday.

“Today there is this great hope for freedom and democracy. You must take this into account and putting it down by firing live rounds into crowds is unacceptable, whichever country does it.” Al Jazeera