How the U.S. tracked down Osama bin Laden 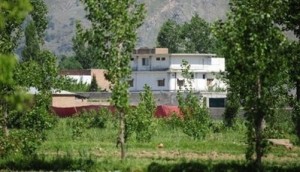 Two years ago, when senior U.S. intelligence officials figured out where the man they thought might be hiding Osama bin Laden was living, they were astounded.

It was a $1 million complex, in an affluent neighborhood of mostly military retirees 35 miles north of Islamabad in Pakistan.

The man they’d been looking for — one of bin Laden’s trusted couriers — had been known to them for many years but only by a nom-de-guerre provided by a detainee being held by the United States. Four years ago, they figured out his real name; two years ago, they got a handle on where he lived.

And it was that compound, built in 2005, that they soon came to believe was built to house bin Laden. In a tale that is fit for a spy novel, four senior administration officials outlined late Sunday how the military raid that killed the world’s most notorious terrorist came together

The officials would not allow their names to be used in discussing the sensitive intelligence and military details of an operation which began Friday morning at 8:20 a.m. ET. Obama, on his way to view tornado damage in Alabama, made the decision to send a small U.S. team in helicopters into the compound to go after bin Laden. 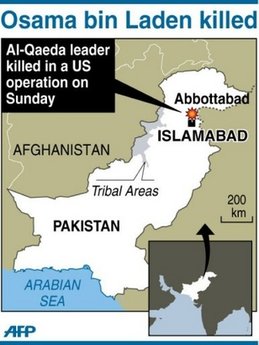 For the president, it was the culmination of months of top-secret security meetings with his top aides as operatives closed in on bin Laden overseas. Very few people in the U.S. government knew anything about it; no one overseas was told.

In the months leading up to Sunday’s dramatic operation, Obama convened nine national security meetings on the subject. Most were held since mid-March — but it was in August 2010 that agents discovered the sprawling compound where bin Laden was hiding.

They said they were shocked by what they saw: a compound eight times larger than any in the area. It was built at the end of a dirt road, they now believe with the express purpose of hiding bin Laden and his family.

The place had no phone or Internet service. The residents, who included the courier and his brother and their families, burned their garbage instead of putting out for collection like everyone else.

It has 18-foot walls, two security gates, and no exterior windows. On third-floor balcony, there were 7-foot high privacy walls.

Officials are not positive, even now, exactly who was living with bin Laden but they believe he had several family members there, including his youngest wife.

The officials did not say why they chose Sunday to make their dramatic raid after months of red-teaming the operation.

They sent in a small team — they did not say who made up the team or how many members it had — in helicopters. A firefight ensued when bin Laden resisted and he, the couriers and several others were killed, possibly including bin Laden’s son.

In the course of events, one of the helicopters went down because of mechanical trouble. Those aboard it were able to destroy it and get away with their fellow team members.

Back at the White House, senior aides gathered in the Situation Room at 1 p.m. Sunday. An hour later, Obama met with them to review final preparations for the raid. At 3:32 p.m., he returned to the Situation Room for another briefing and at 3:50 p.m., he was told that bin Laden was tentatively identified. At 7:01 p.m., he was informed that those on the ground believed there was a “high probability” bin Laden was dead.

Over the next few hours, his aides called members of Congress, relatives of those killed on 9/11 and others to let them know that the president would have an important statement later Sunday night.

At 11:35 p.m., Obama stood before the cameras at the White House and said, “Tonight, I can report to the American people and to the world that the United States has conducted an operation that killed Osama bin Laden.” USA today