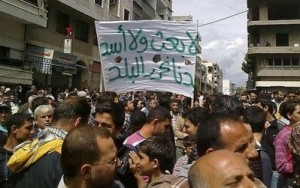 “This outrageous use of violence to quell protests must come to an end now,” Obama said in a statement.

“Instead of listening to their own people, President Assad is blaming outsiders while seeking Iranian assistance in repressing Syria’s citizens through the same brutal tactics that have been used by his Iranian allies.” Reuters

Photo: A picture taken by a mobile phone shows Syrian anti-government protesters holding a banner reading, “No Baath party, no Assad. We want to liberate the country”