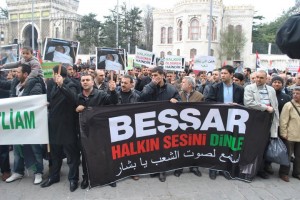 Some of them chanted: “The oppressors will drown in the blood of the martyrs.”

Over the past weeks, Syrian forces have fired tear gas and live bullets at protesters, who are demanding greater reforms than the limited concessions offered by Assad. A key demand is the end to the decades-old emergency laws, which allow the regime a free hand to arrest people without charge.

Turkey has urged Syria’s leader to carry out widespread reforms.