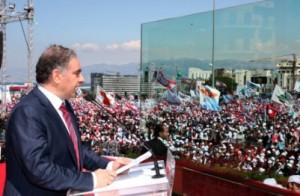 Men in “black shirts” – a reference to Hezbollah – will not control Beirut’s streets, Pharaon said, adding that the Cedar Revolution will continue in a new manner.

“We have engaged in settlements and were deceived. We engaged in dialogue, and were stabbed. They carried out a coup by threatening with their arms… But we will no longer accept their intimidation and the threats of their arms and their blackmail which is being used to hide their corruption.”

National unity and stability cannot be achieved with the presence of arms, he also said, adding that resisting Israel is not possible if there is no national unity or if Lebanon is linked to regional axes.

Pharaon insisted that only the government should make decisions of peace and war, adding that defending Lebanon can be carried out by placing non-state arms under the authority of the state.