Signs of normalcy returning to Egypt 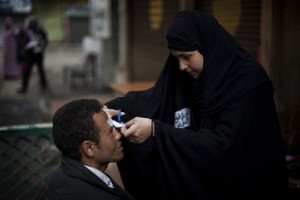 In an exclusive interview with “This Week” anchor Christiane Amanpour, Egypt’s new vice president and its powerful intelligence chief, Omar Suleiman, said, “We can say only go home,” to the protesters. “We cannot do more than that. We cannot push them by force,” he said.

“Do you believe in democracy?” Amanpour asked him.

“For sure, everyone believes in democracy. But when will you do that? When the people here have the culture of democracy,” he said.

“What do you want?” Amanpour asked.

“I want the opposition to know that with this limited time, we can do what President Mubarak has offered. And we cannot do more,” Suleiman said.

And in the most expansive meeting of its kind since the protests began on Jan 25, Suleiman met Sunday with a wide range of Egypt’s opposition groups to discuss reforms that would put the country on a path toward greater democracy.

Attendees at the meeting included supporters of Mohamed ElBaradei, the Nobel Prize winning former head of the International Atomic Energy Agency who returned to the country to join protests.

On Sunday morning protesters were gathering in Cairo’s in Tahrir Square, for what is being called by the protesters “The Day of Martyrs.”

Early reports say that the crowd was again peaceful and the mood far less tense than it had been earlier in the week.

In what is becoming a series of names attached to these gatherings, “The Day of Martyrs” kicks off a “Week of Resilience” or “endurance” depending on the translation.

In other signs of normalcy returning to Cairo, banks re-opened Sunday for a three hour period, an important move as the Egyptian economy has been suffering by an estimated loss of $300 million a day. Roads around the city center have been crowded as more people appear to be going back to work and more businesses open, ABC reporters in Cairo observed.

President Obama declined on Friday to publicly pressure Egyptian President Hosni Mubarak to comply with protesters demands that he step down immediately, saying that “the future of Egypt is going to be in the hands of Egyptians” and that Mubarak will “end up making the right decision” on how to move forward.

Obama was critical, however, of the regime’s inability or failure to halt attacks on protesters and journalists who have been broadcasting the uprising worldwide.

A senior administration official told ABC News Friday that over the last week, Mubarak has not been sleeping, seems unstable, and goes back and forth between standing firm about staying and then saying that he is not appreciated and should just leave. Despite what Mubarak is saying, the official says he thinks that it will be, at the most, a matter of weeks before he hands over power.

The president said he has spoken twice to Mubarak since the crisis in Egypt began, and told him that “going back to the old ways is not going to work.”

“I believe that President Mubarak cares about his country. He’s proud, but he’s also a patriot,” Obama said. “What I suggested to him is he needs to consult with those who are around him in his government. He needs to listen to what’s being voiced by the Egyptian people, and make a judgment about a pathway forward that is orderly but that is meaningful and serious.”

Mubarak has said he won’t seek re-election in September, but will finish his term. Protesters are demanding his immediate removal.

“We are consulting widely within Egypt and with the international community to communicate our strong belief that a successful and orderly transition must be meaningful,” Obama said.

This is the president’s second direct comment on the situation in Egypt of the week. He last took to the cameras Tuesday to convey a similar message and tell President Mubarak that relinquishing power was the right decision, but the transition to a new government “must begin now.”

Mubarak told ABC News’ Christiane Amanpour in an exclusive interview Thursday that while he wants to step down, he fears his immediate departure would create chaos in the country.

“I don’t care what people say about me,” the 82-year-old said in the 30-minute-long interview. “Right now I care about my country, I care about Egypt.”

The United States has strongly condemned the violence that has sprung up in Cairo’s Tahrir, or Liberation, Square, over the last ten days, including harassment of journalists. White House Press Secretary Gibbs said they “speak volumes about the seriousness with which the government looks at an orderly transition.”

Mubarak blamed the violence on the Muslim Brotherhood opposition group, which is banned in Egypt but has but has rallied to the street demonstrations. Protesters charge that the pro-Mubarak supporters who have attacked them in recent days are thugs recruited by the government to create chaos. Mubarak denied any government involvement.

The Muslim Brotherhood told ABC News’ Christiane Amanpour that its party does not intend to field a presidential candidate or seek ministers in a new cabinet.

Photo: An Egyptian anti-Mubarak protester receives care from a volunteer nurse next to Tahrir square in Cairo, Egypt, Sunday, Feb. 6, 2011.