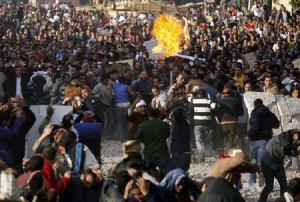 Petrol bombs were thrown in Cairo’s Tahrir Square on Wednesday, a Reuters witness said. An Egyptologist said some had landed in the gardens of a museum housing the world’s greatest collection of Pharaonic treasures.

The Egyptian museum itself however was unscathed.

The Egyptologist, who had been in contact with Egypt’s Supreme Council of Antiquities, said it seemed the petrol bombs were being thrown by protesters demonstrating in favour of President Hosni Mubarak.

“So far the museum is safe, but we don’t know what’s going to happen, because the Mubarak supporters are out of control,” the Egyptologist, who declined to be identified, added.

The army moved to extinguish the flames, a source from the Ministry of Defence told Reuters. Army fire engines were called to the scene to ensure that fire did no damage to “army property”, the source said. Reuters