by yalibnan
545
Middle Eastern political analyst, Fawaz Gerges, says the next 48 hours will be critical in deciding the future of Egypt.
Share: 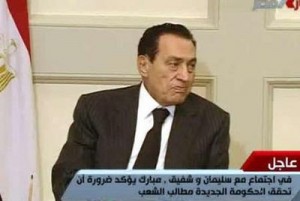 ELEANOR HALL: Middle Eastern political analyst, Fawaz Gerges, says the next 48 hours will be critical in deciding the future of Egypt.

Professor Gerges is the director of the Middle Eastern Centre at the London School of Economics and Political Science and recently completed a 15 month field study in the region.

He says we are now witnessing an earthquake in the Arab world but that while the Israeli government should brace for a deterioration in its relationship with Egypt, the United States should not be afraid of the changes ahead. Professor Gerges spoke to me earlier from London.

Fawaz Gerges, the protesters are still on the streets in Egypt and are not mollified by President Mubarak’s dismissal of his government and appointment of a vice-president. What options are now open to the Egyptian president?

FAWAZ GERGES: I think President Hosni Mubarak is a liability for the institution of the army. He is a deeply wounded man, he is bleeding terribly. I would argue that regardless of whether he survives or not, Egypt will likely witness a new year of politics in the next few days or next few weeks.

ELEANOR HALL: What is your reading of him personally though? Is there any chance that he will resign?

FAWAZ GERGES: President Mubarak is a military man. He will fight to the end so the consensus in Egypt is that the military institution in Egypt will not dare to challenge President Mubarak and basically ask him to leave in the same way that the Tunisian military demanded that President Ben Ali pack and leave.

ELEANOR HALL: So that is a very interesting relationship there, isn’t it because you say that president Mubarak is a military man and yet we’ve seen relative friendliness between protesters and the army on the streets over the weekend.

ELEANOR HALL: Well Egyptian state TV is now reporting that police are back on the streets. What do you think that signals about the president’s intentions?

FAWAZ GERGES: It is a very significant move because this tells me that the security upper office is trying to basically regain momentum, that Mubarak is doing his best to survive.

ELEANOR HALL: And is the key here which way the army goes and its actions on the street?

FAWAZ GERGES: I think the Egyptian military is the driver behind Egyptian politics. We will find out in the next few days whether the army has the will to basically listen to the aspirations of the people or to allow President Mubarak to remain in power.

FAWAZ GERGES: I think 50/50. My take on it, even if Mubarak survives, I think his days are numbered and I think the opposition and the Egyptian people are united in their fundamental goal to basically get President Mubarak out.

ELEANOR HALL: What did you make of President Mubarak’s appointment of Omar Suleiman as his vice-president, could he be a path to a peaceful resolution? Because we are hearing some talk that the opposition leader Mohamed ElBaradei has offered to join him in a transitional government.

FAWAZ GERGES: Mohamed ElBaradei, the unifying figure within the opposition, has said very clearly, he wants a transitional national unity government that basically prepares Egypt for elections and lets the emergence evolve.

The question is, there is a great deal of uncertainty. The situation is in flux. The next 48 hours could be the, could prove to be really pivotal in deciding the future of Egypt and the future of the Mubarak dynasty.

ELEANOR HALL: And what about the role of the Muslim Brotherhood?

The Muslim Brotherhood has learned from Mubarak’s tactics. They are being in the background. They are the force that could really make a big difference in whether Mubarak survives or not in the next few days and next few weeks.

ELEANOR HALL: And what do you make of the US government’s response to this?

FAWAZ GERGES: The Obama administration is terrified. It is terrified of the implications of basically any political vacuum of authority in Egypt. If you listen carefully to the statements coming our of Washington, they have been trying very hard to walk a fine line between saying we support Mubarak who is one of the major allies in the Middle East but also we support the universal rights of the Egyptian people.

ELEANOR HALL: So how much panic would all of this be generating in other Arab regimes in the region?

FAWAZ GERGES: Well, this is an earthquake, it truly is. It is what I call the Arab world Berlin-wall moment. They are terrified because Egypt is the most pivotal state in the Arab world. If it goes the entire Arab world goes.

And that’s why what’s happening in Egypt will have tremendous consequences not just in Egypt itself, the most populous Arab state, the key to the Arab world but also in Saudi Arabia, in Algeria, in Jordan, in Yemen and other places as well.

It is the end of an era and really the beginning of a new one. You are going to have a new game of politics that focuses on democracy, on pluralism, on institutional transparency not just foreign policy and opposition to Israel.

ELEANOR HALL: Is the US though right to fear the new politics that may fill this vacuum?

FAWAZ GERGES: No, I don’t think the United States should really fear the positive changes rocking the Arab world. What is happening in Egypt and Tunisia and other Arab states, this is a bottom up social movement, this is about men and women of all ages, of all political persuasions calling for freedom, calling for democracy. You don’t see Egyptians and Tunisians burning American flags like the Iran revolution in the late 1970s.

This is about change in the Arab world – neither the West nor the United States should really fear the social upheaval rocking the Arab world.

ELEANOR HALL: What about Israel?

FAWAZ GERGES: Well, Israel is terribly concerned and in particular because Mubarak has been one of Israel’s most important strategic allies in the region and I believe, regardless of what regime basically replaces Mubarak, I think you are going to see a deterioration in Egyptian-Israeli relations as long as Israel opposes a peace settlement that takes into account the legitimate grievances and rights of the Palestinian people.

I think if I were Israeli prime minister now, I would be terrified. If Israel loses Egypt, this could be really a major strategic setback for Israel’s foreign policy and Israel’s current policies in the region.

ELEANOR HALL: Are we likely to see an explosion of violence throughout the region as a result of this?

ELEANOR HALL: Is there also a possibility that things could really degenerate in Egypt into terrible violence?

FAWAZ GERGES: No, no, I don’t think so. I think, I’m hoping that the next 48 hours will bring about some kind of calm in Egypt. I think at the end of the day, I hope that the institution of the military will begin to negotiate for the opposition.

ELEANOR HALL: Professor Gerges, thanks so much for speaking to us.

ELEANOR HALL: That’s Professor Fawaz Gerges, the director of the Middle East Centre at the London School of Economics speaking to me from London.