They hugged and kissed the soldiers and posed for photographs with them. Some spray-painted the military vehicles with slogans demanding the ouster of President Hosni Mubarak.

In Tahrir Square in the center of the city, protesters hoisted an army officer waving an Egyptian flag on their shoulders and chanted “The people and the army are one hand together!”

The military appeared to be going to great lengths to calm the capital without appearing opposed to the protests. While there was no evidence of a large-scale fraying of soldiers’ loyalty, they were taking pains not to antagonize demonstrators. At least one officer ordered his troops to avoid even pushing them.

Egypt’s 500,000-man army has long enjoyed the respect of citizens who perceive it as the country’s least corrupt and most efficient public institution, particularly compared to a police force notorious for heavy handedness and corruption. It is touted as having defeated Israel in the 1973 Mideast War, and revered for that role.

The military, for its part, sees itself as the guarantor of national stability and above the political fray, loyal to both the government and what it sees as the interests of the general population.

Mubarak, an 82-year-old former air force chief, on Saturday named his intelligence chief, Omar Suleiman, as his vice president. Suleiman also hails from the military, which has given Egypt all of its four presidents since the monarchy was toppled in 1952.

The military chief of staff, Lt. Gen. Sami Hafez Anan, cut short a visit to the United States and flew back to Cairo on Friday night.

It was not clear if the unrest still surging in Cairo and around the country would end up pushing the army to abandon either its easygoing stance toward the demonstrators, or its loyalty to the regime.

Although it has almost completely withdrawn from politics since then, the army has added to its strength by venturing into economic activity, playing a growing role in such key service industries as food production and construction.

It stepped in 2008 during an acute shortage of bread, Egypt’s main stable, which it provided from its own bakeries. It has since opened outlets for basic food items sold as vastly discounted prices. 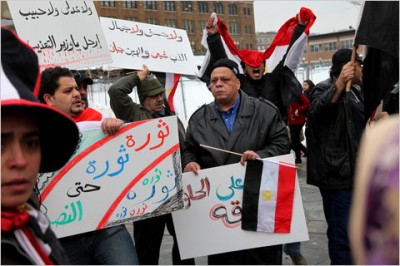 The army was clearly projecting an image of being the ultimate power in the country, moving swiftly to protect the state TV building, parliament, the prime minister’s office and the Egyptian Museum, home to priceless artifacts dating back as many as 5,000 years.

The night before, some soldiers stood by and watched as looters sat upon supermarkets, shopping malls, police stations and nightclubs.

But the army will soon have to enforce order on the streets and that, in turn, would risk the goodwill of some of the protesters. That shift was already evident on Saturday.

It warned it would deal harshly with “violators” and strongly advised against breaching the nighttime curfew or joining gatherings. AP