Obama calls on Egypt to bring back the Internet, social media 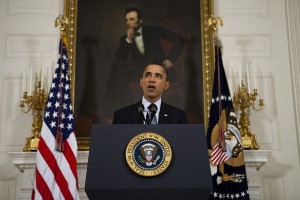 US President Obama called on Egypt to bring back the Internet and access to social media websites such as Facebook and Twitter that have been suspended this week by the government there.

“The people of Egypt have rights that are universal,” Obama said. “That includes the right to peaceful assembly and association, the right to free speech and the ability to determine their own destiny. These are human rights and the United States will stand up for them everywhere.

“I also call upon the Egyptian government to reverse the actions that they’ve taken to interfere with access to the Internet, with cellphone service and to social networks that do so much to connect people in the 21st century.”

White House Press Secretary Robert Gibbs also wrote on Twitter, from his @PressSec account, on Friday “Very concerned about violence in Egypt — government must respect the rights of the Egyptian people & turn on social networking and internet.”

Internet service across Egypt was shut down on Friday just after midnight. On Thursday, BlackBerry Internet access was blacked out, and on Tuesday, Twitter and Facebook were blocked to Egyptians.

The Egyptian government also ordered mobile phone carriers to temporarily halt their service on Friday — cutting off nearly every form of digital communication in the country.

The protesters have flooded the streets of Egypt’s major cities for the last four days, calling for Egyptian President Hosni Mubarak to step down and a new government to be put in place, with increased political freedom. Mubarak has held the presidency for more than 30 years and many demonstrators have referred to him as a dictator rather than a president.

The protests have become violent, with tanks rolling through nighttime protests despite an evening curfew. Demonstrators have been sprayed with water cannons and tear gas. Some have been shot and reportedly a handful have been killed.

“Those protesting in the streets have a responsibility to express themselves peacefully. Violence and destruction will not lead to the reforms that they seek,” Obama said in his speech at the White House on Friday.

“Going forward this moment of volatility has to be turned into a moment of promise…. Violence will not address the grievances of the Egyptian people and suppressing ideas never succeeds in making them go away.” LAT