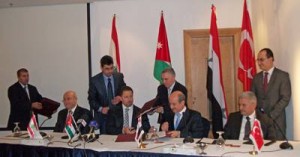 The transport ministers of Jordan, Syria, Lebanon and Turkey held a meeting in the Jordanian capital and decided to assign each country the responsibility of following up the development of one of the sectors labeled as priority areas.

Jordan was entrusted with the transport sector, Syria with energy, Lebanon with tourism and Turkey with industry, according to the Jordanian Transport Minister Alaa Batayneh.

Underlining the importance of land, maritime and air transport projects in pushing forward the integration drive, Batayneh said, “Once we realize transport integration among the four countries, we will be able to tackle other aspects of cooperation.”

The partners set up a quadruple cooperation council during a meeting of their foreign ministers in New York last September when they renewed commitment to a statement issued by the four countries in Istanbul in June of the same year on boosting cooperation.

After intensive technical meetings in Amman earlier this week, the four states signed a communiqué setting up a higher committee and other technical panels that will examine and unify relevant legislations, Batayneh said.

Experts in charge will discuss all transport issues, including customs, to streamline and enhance the flow of goods and passengers among the four countries, given that the partner states have already lifted visa requirements, he added.

Turkish Transport Minister Binali Yildirim underlined the political will to achieve closer ties among the four Middle East states, saying: “Each country will develop its infrastructure individually with a view to achieving economic integration between the north and the south.” Arab News