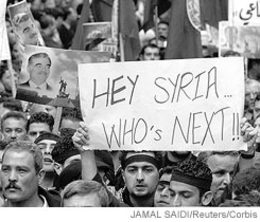 According to a report by by Israeli news website ynet , the Syrian regime murdered methodically, since the early 1980s , more than 30 Lebanese leaders and public figures, and nobody opened his mouth or said anything. Anyone who threatened Syria’s position in Lebanon was removed. And so, leading figures in some of Lebanon’s most prominent families were assassinated, as were religious leaders, security officials, and former Prime Minister Rafik Hariri.

The report which was titled ‘ Everyone scared of Syria’ went on to say that with the exception of one case , “nobody was ever indicted over these acts. This is the case even though there isn’t a child in Lebanon – or one spy agency in the world – who doesn’t know who really stands behind these murders. ”

“When the international probe into the Hariri murder (as well as the other 14 Lebanese, some of them senior officials, who died along with him) was launched, and we started hearing reports that pointed the finger at Hezbollah, the Lebanese people were scared. Suddenly, it became possible that a Lebanese organization was a party to the series of political assassinations of legitimate, popular leaders.”

According to the report people in Israel “didn’t quite understand what all the fuss in Lebanon was about, ” since in their “view it’s obvious that Hezbollah would join forces with the Syrians or Iranians in order to remove leaders who undermine the interests of these two states.” The report added ” Yet from Lebanon things look differently. ”

The report added ” Hezbollah members murdered Hariri, yet they served as mercenaries on behalf of the Syrian regime. The Americans know this, European spy agencies know this, and we can assume that Israel is quite familiar with the material as well. Yet all of them – each for their own reasons – prefer to ignore Syria’s part in the murder and place Hezbollah in the limelight.”

The report concluded: ” At this time, it’s most convenient for everyone to deal with the mercenary and forget about the mafia Don, who may be a partner for some good business in the future. “