Analysis: Will Hezbollah be brought to justice in Lebanon? 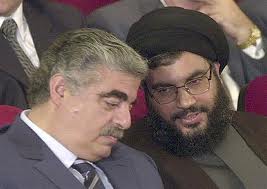 Surrounded by joyful children, Lebanon’s Prime Minister Saad Hariri recently inaugurated the holiday season in glitzy downtown Beirut. It was a festive scene—but one that ignored the demons currently threatening that country’s fragile stability. Tensions in Lebanon are high. The U.N.-backed Special Tribunal, set up in the Hague to prosecute the killers of Rafik Hariri, the former prime minister and Saad’s father, is preparing to issue indictments.

All indications point to members of Hezbollah, the Shiite militant group loyal to Iran, as the main culprits in the 2005 murder. If Hezbollah militants are indicted, it could lead to serious unrest between the group’s Shiite base and the largely Sunni followers of the assassinated prime minister. Regional actors including Iran, Syria, Saudi Arabia, Israel and the United States all have a stake in the outcome.

Many have called for scuttling the tribunal out of fear of the instability it could create. Lebanon is not prepared for justice, these voices claim. New York Times columnist Roger Cohen has argued that “Lebanese stability is precarious and tenuous: it trumps justice delayed, foreign and flawed.” And Lebanese Druze leader Walid Jumblatt has questioned “the use for tribunal justice if it leads to slaughter.” True enough, the Middle East does not need another Sunni-Shiite conflict. But rewarding those who engage in assassinations by letting them walk free will only encourage more violence.

Justice is the only path to lasting stability in Lebanon. Without it, Sunni extremists itching to take on their Shiite counterparts will only grow in strength. Sunnis more generally will feel betrayed twice—first for having their leader assassinated and second for being denied justice. Thwarting the tribunal is a guaranteed path to further Sunni-Shiite tensions and a greater sense of anger in the country and the region.

For its part, Hezbollah is attempting to smear the tribunal, labeling it an “American-Israeli project.” But no one knows what evidence an indictment will put forward. Judgments about the court’s integrity should be withheld until then, and no one should be duped by Hezbollah’s misinformation campaign.

Most people in Lebanon already believe that Hezbollah has been exposed for what it truly is, especially after the self-proclaimed “resistance” against Israel turned its weapons against fellow Lebanese in the domestic troubles of 2008. An indictment with solid evidence will only further isolate the group within Lebanon and tarnish its carefully cultivated image in the broader Arab and Muslim worlds.

That said, Hezbollah’s overwhelming hold over Lebanon’s Shiite community will no doubt remain a key source of its strength. Unraveling this relationship will require a long-term strategy, including engaging with local partners to find alternatives to the extensive social services and patronage networks that the group has employed to capture Shiite loyalty since its 1983 bombing of the U.S. Marine barracks in Beirut.

As for the assassination of Rafik Hariri, few Lebanese believe that Hezbollah would have acted without direction from—and coordination with—the Syrian forces that controlled their country at the time of the crime in February 2005. Collective Lebanese consciousness has been shaped by a long history of Syrian-inspired political killings, and Syria has long maintained close relations with Hezbollah.

It remains to be seen whether the evidence collected at the Hague will be enough to prosecute not only those who carried out the crime, but those who planned and ordered the killing. International pressure on the tribunal may spare the Syrian regime.

For those of us watching these developments in the relative safety of America, let us remember that what happens in the seemingly distant Middle East often comes to haunt us. As we prepare to usher in the new year, let us think of families who do so with genuine fear. And let us stand by those pursuing justice not only because it’s the right thing, but for the sake of our long-term interests and theirs.

Mr. Maksad, a consultant with the law firm DLA Piper, is an executive director at the Lebanon Renaissance Foundation, which seeks to strengthen U.S.-Lebanon relations and support a free, pluralistic Lebanon.