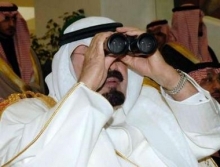 Suddenly the health of three of the most powerful men in Saudi Arabia is in the news.

King Abdullah, who is 86, is preparing to travel to America for the treatment of a herniated disc.

Another contender for the throne, the governor of Riyadh, Prince Salman, is coming home after surgery abroad.

And this may explain why the Saudi royal family has been relatively quick in releasing the news about the health of the king.

The family has sought to reassure oil markets and their international allies that there will be no power vacuum while King Abdullah is abroad.

The health of Saudi kings and princes in line for the throne matters not only for the Saudis, but for the whole world.

audi Arabia is one of the biggest oil producers, and controls more than a fifth of the world’s crude reserves.

So, any uncertainty over who controls the oil taps can make markets jittery – the last thing the world wants now in times of global economic troubles.

But it’s not only about oil. The petrodollars have given the Saudis diplomatic muscle as never before.

As key Western allies and important regional players, their support and clout is needed in dealing with many of the region’s intractable conflicts: in Lebanon, Iraq, the Arab-Israeli conflict and the ongoing stand-off with Iran.

Bringing home the crown prince so abruptly – a measure designed to reassure global markets and Saudi allies – may only work for the short term.

It’s not a secret that the crown prince, who is in his early 80s, is poorly and is believed to have had cancer treatment abroad.

In an effort to remove uncertainty over succession, King Abdullah had created a new body – the Allegiance Council.

It’s made up of princes empowered to elect the next crown prince. In the past, that was only the monarch’s prerogative.

But the new system is not due to come into effect until after King Abdullah has died and been succeeded by the crown prince.

Only then, will the world know whether the new council will make the process more predictable, or – like the Saudi royal family – it will be shrouded in secrecy.