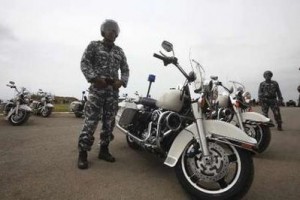 The US Ambassador to Lebanon Michele Sison presented another 20 Harley Davidson motorcycles to General Ashraf Rifi , Internal Security Forces’ chief at the ISF Mobile Forces headquarters in the Beirut suburb of Dbayeh on Tuesday.

A statement by the US Embassy said the motorcycles were “state-of-the-art police vehicles, identical to ones used by American law enforcement agencies, which will enable the ISF to perform its law enforcement, safety and traffic management functions.”

“The motorcycles are outfitted with specialized police equipment including enhanced steering and braking capabilities and lights and sirens with mounted microphones and speakers,” the statement said.

In addition to the 20 new motorcycles, the United States also provided spare parts and technical assistance to refurbish an additional 24 Harley Davidson motorcycles already in the ISF fleet.

Speaking during the hand-over ceremony, Sison characterized the donation as filling a specific need for the ISF: “Today, we add another iconic American vehicle to the ISF arsenal … The capability that these Harley Davidson motorcycles will provide the ISF is something that the ISF officers who enforce the law in Lebanon have been asking for … These impressive and easily recognizable motorcycles will certainly assist the ISF in projecting its presence in the eyes of the Lebanese citizens, and if I might add – doing so with great style.”

Photo: Members of Lebanon’s Internal Security Forces stand next to Harley-Davidson motorcycles during a donation ceremony in Dbayeh, north of Beirut