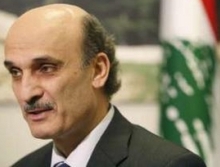 Answering a question on a possible Syrian intervention to control the situation in Qousaya and Kfar Zabad — the scene of armed clashes Thursday among the members of the Popular Front for the Liberation of Palestine-General Command – Geagea said: “The Palestinian camps located near the Lebanese-Syrian border and operating on Lebanese territory are inaccessible except via Syrian territories.”

Geagea added that these bases “host armed groups created by the Syrian intelligence, the thing which is known to everyone, and they are funded, one way or another, by the Syrian State that trains and arms them before sending them to Lebanon.”

“If the Syrian State had the intention to act as a nation that respects itself in engaging with its neighbors, it would’ve fulfilled its duties toward them through halting the training, arming and funding of these military camps.”

The Lebanese army fought a 106 day battle in 2007 against Fatah al Islam Palestinian militants , another Syrian backed group. Hundreds died in that battle at the Nahr al Bared camp where the fighting took place and the camp was completely destroyed. Fatah al Islam’s leader Shaker Absi , who fled to Syria after he was defeated by the Lebanese army served as an officer in the Syrian army.